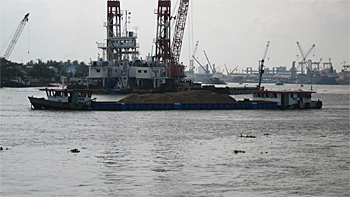 Consultancy firm Grontmij and the municipality of Rotterdam, will assist the consortium Vietnam Climate Adaptation Partnership (VCAPS) to develop the Ho Chi Minh City’s adaptation strategy. An important focus will be the port’s relocation from the city to the sea.

Increasing demand for space
Ho Chi Minh City is a densely populated delta city with a large port and it plays a crucial role in the national economy. The city’s economic development and rapid population growth has resulted in an increasing demand for space. Every year, the low-lying delta and heavy tropical rains result in serious flooding, sometimes causing significant loss of life.

Anticipation of climate change
These problems are exacerbated by climate change. In the near future, increased river discharge and rising sea levels will present increasingly severe risks to the safety of the city's inhabitants. These challenges demand a sustainable development strategy in which anticipating the impact of climate change (adaptation) plays a major role.

Dutch consortium of specialists on urban climate adaptation
VCAPS is led by Grontmij Netherlands and further comprises Witteveen+Bos, Bosch Slabbers landscape architects, Ecorys, Institute for Environmental Studies (IVM) and Urban Solutions. The project offers the consortium the opportunity to use its worldwide experience and knowledge in the field of urban climate change in the Vietnamese context. At the same time, it creates a stimulus for business opportunities for Dutch companies in Vietnam
Dutch initiative Connection Delta Cities.

Cooperation between two port cities
With the Rotterdam-based initiative Connecting Delta Cities, large delta cities all over the world are working together to prepare themselves for the effects of climate change. In March this year, an intensive cooperation was established regarding the sustainable and climate-proof development of the city and port of Ho Chi Minh City. The Dutch cooperation with Ho Chi Minh City is a good example of the projects in which Rotterdam has proved itself to be an authority in the field of delta technology and climate adaptation.