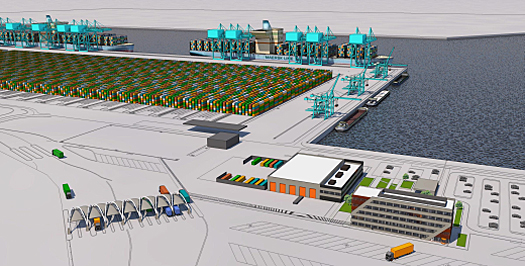 The construction of the new APM Terminals’ Maasvlakte II has been awarded to a Dutch consortium of GMB, Dura Vermeer and Imtech.

The order, worth about 100 million euro, covers the laying of surfacing, cables, pipes, craneways and rail connections.

Total investments for the terminal are estimated at around half a billion Euros.

Completed April 2014
Work will begin this week and should be completed in April 2014, with the terminal being operational at the end of 2014.

The 180 hectare terminal will boast an initial annual capacity of 2.7 million TEU, with the option of being increased to 4.5 million TEU.

Deepsea quay
APM Terminals’ Maasvalkte II will boast 2,800 meters of deepsea quay, 1,000 meters of which will be completed in the first phase. A 500 meter long quay for inland vessels and feeders will also be built, with a depth in excess of 10 meters. The quay wall will have a depth of 20 meters.

The terminal will be able to welcome the latest generation of container ships. Maersk, the biggest container shipping line in the world and sister of APMT, will put the first of twenty ships with a capacity of 18,000 TEU into operation next year. 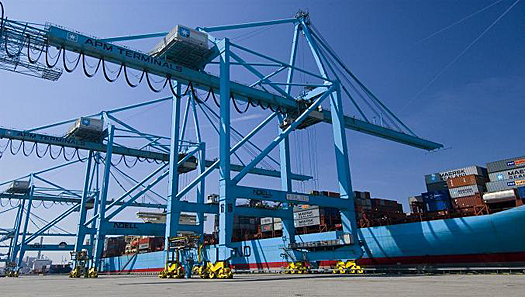 APMT already has a terminal on the existing Maasvlakte and will continue to use this alongside the new one.

In addition to APMT, the Port of Rotterdam Authority has granted a container terminal on the Second Maasvlakte to the consortium of DP World and four large container shipping companies, under the name Rotterdam World Gateway.

The news release was originally published on the website of Port of Rotterdam (in Dutch only).