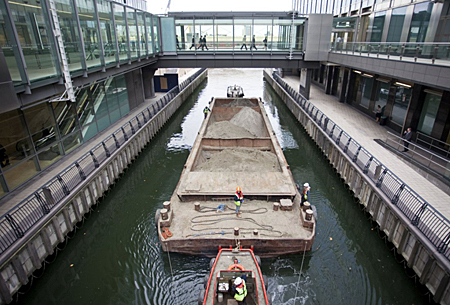 BAM Nuttall and partners Van Oord UK have been confirmed for the job to ship excavated material from Crossrail’s tunnel construction from the Thames river to create new wetlands 100 kilometers north east of London, at Wallasea Island, next to the River Crouch.

The GBP 50 million project will see the joint venture shift around 4.5 million tonnes of excavated materials to be used to create the new wetlands for the Royal Society for the Protection of Birds (RSPB).

Andy Mitchell, Crossrail programme director said: “At least two-thirds of all Crossrail excavated material will be used to create the wetland at Wallasea Island.

“With the award of the contract to transport excavated material, Crossrail has now awarded the last remaining major contract that will allow tunnelling to commence in spring 2012.”

First ships arriving in the summer
Crossrail tunnelling will commence at Royal Oak in March with the first ships containing the excavated material arriving at Wallasea Island during summer 2012.

Up to five ships a day will transport excavated material down the River Thames to Southend–on-Sea.

Construction of the new jetty is currently underway and will complete next year.

This news release was originally published on the website of BAM Nutall.