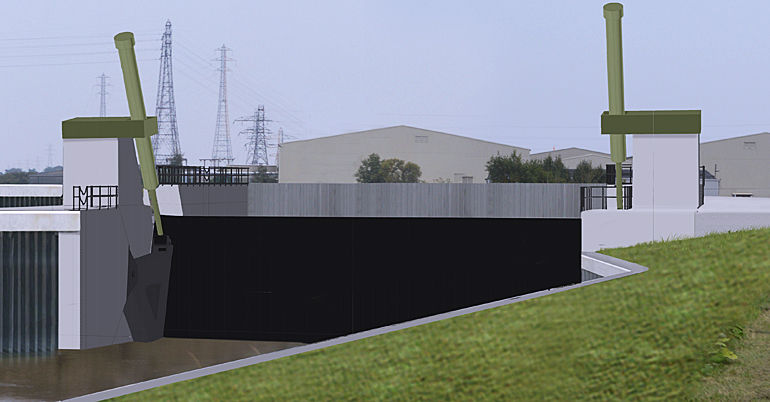 The Environment Agency has given the green light for the construction of a 100 million UK pound flood barrier across the port entrance of Boston, UK. Following approval for the scheme, the contract for the project has been awarded to Bam Nuttall and Mott MacDonald joint venture (BMMJV). Work is set to begin in January next year. 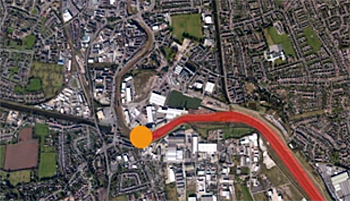 In the future the incoming tide from the North Sea (red line) can be stopped by the moveable barrier (yellow dot) protecting the city of Boston (top, along river) from flooding.

Moveable flood gate
The tidal barrier will feature a moveable gate across the River Witham (see impression top page), together with a new control building to operate the barrier, new flood defence walls on both banks, and a replacement gate across the entrance to the existing Port of Boston wet dock.

The barrier will make Boston one of the best protected areas from flooding in England, outside of London.

New state of the art
UK Environment minister Thérèse Coffey said: ‘Not only is this fantastic news for the 14,000 home and business owners who will be better protected from flooding – Boston’s new state of the art defences will help attract investment, benefitting the wider area.’

‘I am pleased that it will help to protect more than 14,000 homes and businesses’, Howard Boyd said, ‘from the kind of flooding the town experienced in December 2013. I look forward to the finished scheme.’ 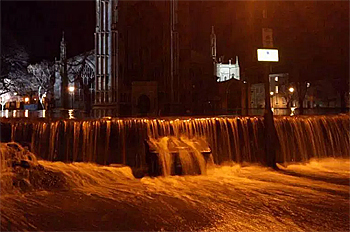 |A storm on the North Sea caused an extreme tidal surge that overtopped the flood walls in Boston in December 2013.

Proven track record
Framework Director Allan Rogers of the BMM Joint Venture said he is looking forward to the delivery of the innovative flood protection scheme.

‘We have a proven track record of success having recently completed phase one of the Leeds Flood Alleviation Scheme’, Rogers said.

Overtopping in 2013
Boston has a long history of tidal flooding. The town flooded in 1953, again in 1978, and more recently during the tidal surge on 5 December 2013 when defences were overtopped, damaged or breached. This affected the town extensively, with over 800 properties flooded across 55 streets.

The Environment Agency is investing 2.5 billion pound across the country, which will see 1,500 flood defences reducing risk to 300,000 homes by 2021.

This news item was originally published on the websites of UK Government and BAM Nuttall.