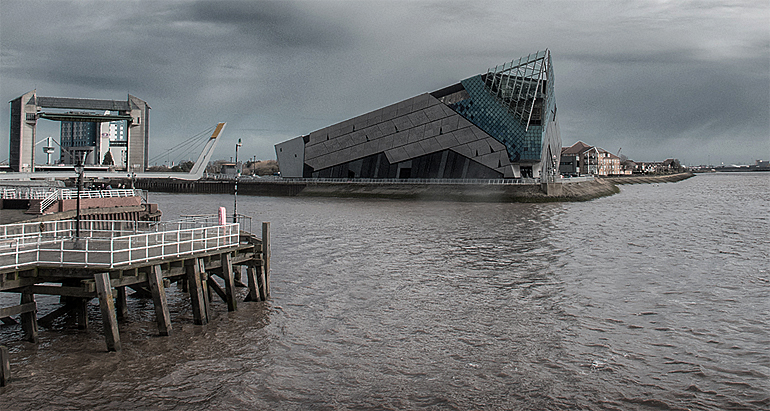 The Environment Agency announced it secured a 42 million UK pound funding for the Humber Hull Frontages scheme, to improve the 19 km tidal flood defences along the Humber Estuary.

Contractor BAM Nuttall Mott MacDonald Joint Venture (BMM JV) has been appointed to develop a detailed design and build plan for the waterfront. Subject to planning approval, work on the Humber Hull Frontages scheme will start next summer and will be completed by 2020. 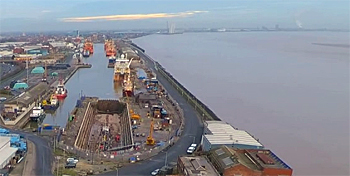 The improvement will also include sea wall of St Andrew's fish dock, left on aerial photo. Right the Humber estuary.

Extending flood protection
Proposed improvements in Hull will be supported by a further 4 kilometres of new and raised tidal defences on either side of the city, delivered by East Riding of Yorkshire Council in partnership with the Environment Agency.

A 1m high barrier will go up in some places, which may be set back to integrate better into the surroundings.

On the occasion of the announcement UK Floods Minister, Thérèse Coffey said: ‘This state of the art scheme is great news for homeowners and businesses along the Humber Estuary, especially for the city of Hull, as we both upgrade existing defences and add new defences extending protection.’ 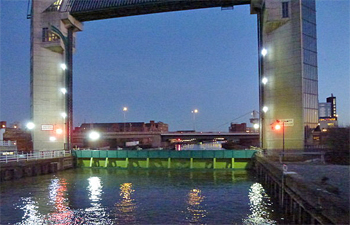 Closed tidal barrier that protects the city of Hull against floods from the estuary since 1980.

Allan Rogers, BAM Nuttall National Framework Director said: ‘It’s a scheme that will deliver outcome measures that will lessen the flood risk to business and homes. We are committed to delivering the scheme efficiently and with stakeholder issues in mind.’

The Humber Hull Frontages scheme is one of a number of tidal flood alleviation projects that form part of the Humber Flood Risk Management Strategy.

This news item was originally published on the website of BAM Nuttall.