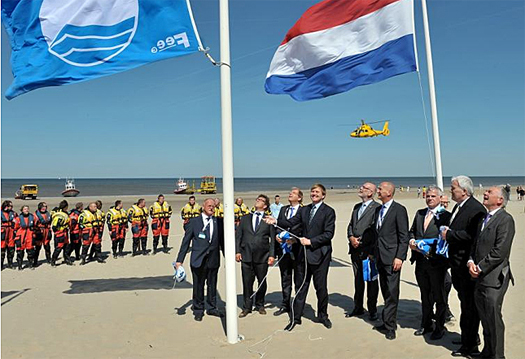 The jury of FEE International has awarded 140 Blue Flags this year for beaches and marinas in the Netherlands. This is an increase of 9% from 2011. With this high number of Netherlands belongs to the European frontrunners of the Blue Flag campaign. The 2012 blue flags be handed to 52 Dutch coastal and inland beaches and 88 marinas.

Clean and safe
The Blue Flag is an international award which is annually awarded to beaches and marinas which are safe and clean. Every year the nominees have to meet a number of important criteria such as clean water, good sanitation (swimming) and a high degree of safety. The Blue Flag is valid for only one year.

The Dutch coast and water sport sector celebrated the 25 year existence of the Blue Flag quality mark on the beach of Noordwijk aan Zee on May 25.

Official opening new season
In the presence of his Royal Highness the Prince of Orange, jury member Patrick Poelmann officially announced the locations of the beaches and marinas that may run the flag in 2012. The Prince of orange opened the Blue Flag 2012 season by raising the flag on the beach of Noordwijk.

25 years blue flag
The Blue Flag campaign was launched worldwide in 1987. Also in Netherlands. The municipalities of Ameland, Noordwijk, Veere, Schouwen-Duiveland and Transient Marina Dellewal were the first to participate in this campaign.

The Blue Flag works towards sustainable development of beaches and marinas through strict criteria dealing with Water Quality, Environmental Education and Information, Environmental Management, and Safety and Other Services.

The Blue Flag Programme is owned and run by the non-government, non-profit organisation the Foundation for Environmental Education (FEE).