Royal Boskalis Westminster has been awarded a contract by CJSC Baltstroy for the dredging and construction of the Bronka Port shipping channel in St Petersburg, Russian Federation.

The total value of the contract amounts to approximately 130 million euro.

The project is due to commence in spring 2014 and is expected to be completed late 2015. 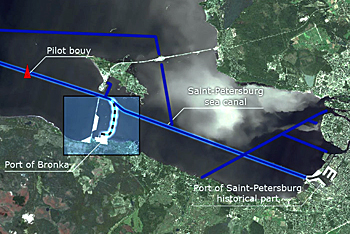 Under construction-port of Bronka is situated close to the St.Petersburg storm surge barrier. The black dotted line is the route of shipping channel that will connect Bronka port to the main sea port channel.

Additional contract
Bronka is a new port facility currently being constructed to increase the container throughput capacity in the St Petersburg region.

This contract comes in addition to the Bronka port land reclamation contract that was awarded to Boskalis in June 2013, which is currently being executed.

With a versatile fleet of over 1,100 units it operates in around 75 countries across six continents. Including its share in partnerships, Boskalis has more than 11,000 employees.

This news item is based on the press release published on the website of Boskalis.