Boskalis contracted for Dutch Room for the River project at Veessen-Wapenveld, the Netherlands 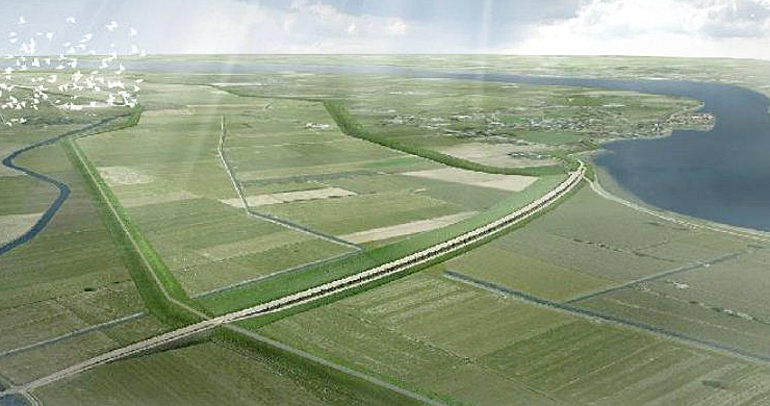 Royal Boskalis Westminster has been awarded a contract by the Vallei en Veluwe district water board for the construction of the Veessen-Wapenveld high-water channel in the province of Gelderland, the Netherlands.

The project is one of the more than 30 measures that make up the Dutch national Room for the River program, which is aimed at providing better flood protection for areas close to the country's rivers.

The work, which will be executed in conjunction with Van Hattum en Blankevoort in the IJsselweide construction consortium, is scheduled to start after the summer.

The contract represents a value of around 75 million euro of which Boskalis' share is 50%. 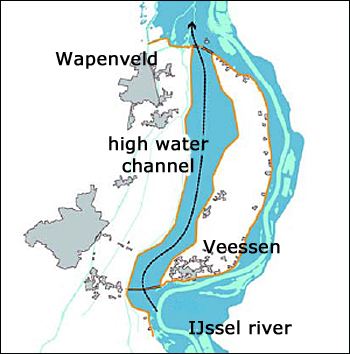 The high-water channel will be between 500 and 1.500 meters wide and will be formed by building two dikes of around 8 kilometers long between the villages of Veessen and Wapenveld. The channel will not be dug out.

Under normal conditions the channel area is used as farm land. Two bridges will be built to allow the inhabitants of Veessen, in case of high water, to cross the channel and stay connected to the hinterland.

More Room for the river projects
In addition to this new contract Boskalis is already involved in several other major hydraulic engineering projects in the context of the government's Room for the River program.

These include the Lower Rhine project, which involves adapting four flood plains along the river between the towns of Renkum and Rhenen, the Deventer project, where a total of six secondary channels of the IJssel river are being dug along a length of 10 kilometers.

Another project by Boskalis is the Noordwaard project near the town of Gorinchem, where an area is being 'depoldered' to allow the New Merwede river to flow more rapidly during periods of excess rainfall.

About Room for the river
In 2006 Rijkswaterstaat, the Dutch national department for Public Works and Water Management, started the Room for the River project that encompasses four rivers: Rhine, Meuse, Waal and IJssel. At 30 locations the rivers will be given more room to increase their capacity in case of high discharges.

The design presents an integrated spatial plan with the main objectives of flood protection, master landscaping and the improvement of overall environmental conditions. Completion of a basic package of the 30 projects is foreseen for 2015, with a budget of 2.2 billion euro.

Measures in the river project include: placing and moving dykes, depoldering, creating and increasing the depth of flood channels, reducing the height of the groynes, removing obstacles, and the construction of 'green rivers' serving as a flood bypass.

This news item is based on a press release originally published on the website of Boskalis.