President of Maldives, Abdulla Yameen Abdul Gayoom, inaugurated a land reclamation project on the island of Meedhoo in Dhaalu atoll on 16 March.

Speaking at the launching ceremony, Yameen said he visited the island with a gift for its residents, noting that the people of Meedhoo had been waiting for over 20 years for such development projects. He urged the people of Meedhoo to utilise the reclaimed land for economic and social purposes.

The project has been awarded to the Dutch dredging company Boskalis and includes reclamation of 17.5 hectares of land and set up 485 metres of revetment in Meedhoo.

Boskalis has also been contracted by the government to reclaim land in Baa Eydhafushi, Dhaalu Kudahuvadhoo, and Kaafu Thulusdhoo. 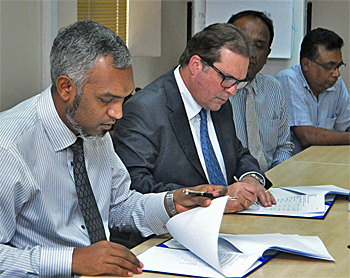 The project is funded by government of Maldives, costing 37 million USD and the works has to be completed within 540 days.

During the dredging and reclamation activities, Boskalis followed strict guidelines to minimize suspended sediments escaping from the working areas and employed mitigating measures such as protective bunds on the reef and suspension basins in the reclamation area when necessary.

This news item is based on presse releases by the Minister of Housing and Infrastructure of Maldives.