A consortium consisting of Dutch dredging companies Van Oord, Royal Boskalis Westminster, National Marine Dredging Company NMDC (Abu Dhabi) and Jan de Nul (Belgium) has acquired a contract from the Suez Canal Authorities in connection with the expansion of the Suez Canal, which provides a vital shipping link between Europe and Asia.

The total contract value amounts to USD 1.5 billion, with each partner entitled to an equal share of USD 375 million.

On the occasion the Suez Canal Authorities also awarded a second consortium of Dredging International (Belgium) and Great Lakes Dredge & Dock Company (USA) the assignment to deepen and widen the western branch of the Suez Canal, worth USD 540 million.

The new Suez Canal will partially run parallel to the current waterway and entail widening and deepening of existing parts thereof. 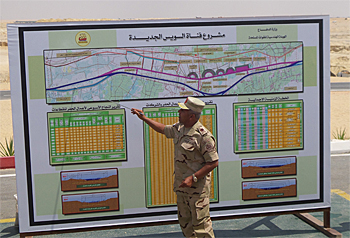 Two-way traffic
The contract includes the construction of the parallel section of the canal with a length of approximately 50 kilometers to allow ships to simultaneously transit in two directions as well as the widening and deepening of a number of existing sections to a depth of 24 meters.

The majority of the dredging activities for the canal expansion will be executed with 17 cutter suction dredgers.

The project will commence in 2014 and is expected to be completed in 2015.

Double revenues
Egypt hopes the new canal will more than double revenues from the waterway by 2023 to USD 13.5 billion from USD 5 billion.

The expansion project involves dry digging of a new 35 km canal, and dredging of 37 kilometres for deepening and widening of the existing canal. The Suez Canal is 163 km long.

It also plans to develop 76,000 sq km in the area into an international industrial and logistic hub to attract more ships and generate income.

The flagship project in President Abdel Fattah al-Sisi's program is to revive an economy battered by years of political turmoil.

This news item is based on press releases published on the websites of Boskalis and Van Oord.