In a few months, construction is set to begin on the Nereda plant at the waste water treatment plant Alpnach in Switserland. WWTP Alpnach is Royal HaskoningDHV´s first Nereda in Switserland.

Nereda technology is selected for the extension of the Alpnach Wastewater Treatment Plant in Switzerland and will be operational by 2019.

Low operational costs
The extension of the Alpnach WWTP (on top photo) was tendered based on conventional sequencing batch reactor (SBR) technology but – also evaluated the possibilities and advantages of the Nereda technology.

The innovative aerobic granular biomass technology provides an optimal and cost-effective solution to treat the wastewater as an alternative to conventional systems.

The Nereda plant will be build by WABAG Water Technology Switzerland who signed a 10 year cooperation agreement with Royal HaskoningDHV in November 2014 to deliver Nereda to Switzerland. 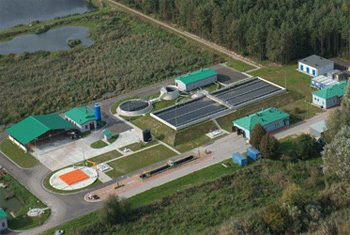 Three reactor tanks
After start-up Alpnach WWTP will treat a municipal and industrial effluent load of 49,000 population equivalent (or 65,000 p.e. in accordance with Swiss calculations), with a daily average flow of 14,000 m3/day and a peak flow of 1,845 m3/hour.

The Nereda installation is based on a configuration with one buffer tank and three Nereda reactors.

Gerhard Ryhiner, Chairman of the managing board WABAG Water Technology said: "The advantages of Nereda are convincing: a reduced footprint and volume, and higher nitrogen removal in spite of the reduced volume."

The reduction of the footprint goes upto 34 percent and the volume reduction as high as 40 percent.

On four continents
Currently there are more than 20 Nereda wastewater treatment plants in operation or under construction on 4 continents.

This video shows that, given the circumstances, Nereda technology can be applied differently. At Dutch wwtp Vroomshoop Nereda is a hybrid plant with a buffer. The plant at wwtp Dinxperlo is a greenfield project.