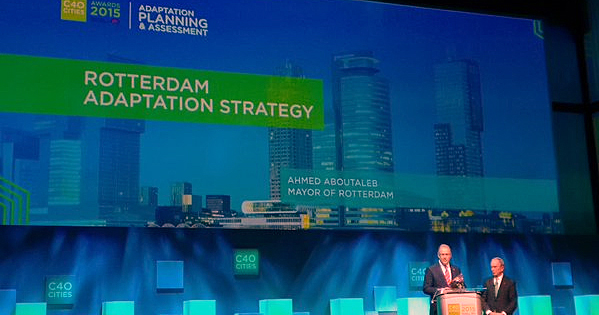 The city of Rotterdam was awarded with the first place in the category Adaptation planning & assessment, for its take on climate adaptation as described in the Rotterdam Climate change adaptation strategy.

In its category Rotterdam competed with New Orleans, USA and Melbourne, Australia. 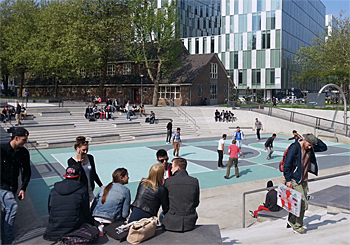 One of Rotterdam's praised adaptation measures is the Benthem water square that combines water storage and recreational space for youth to sport, play and linger.

Course confirmation
Mayor Ahmed Aboutaleb and vice-mayor Pex Langenberg attended the awards ceremony. Aboutaleb: "Our adaptation strategy and the other entries from around the world are real-life examples of the importance of cities’ actions. Each and every one shows local action and its global results."

Vice-mayor Pex Langenberg (sustainability): "This award is a recognition of our choice to combine sustainability approaches from various fields: climate, water, social and economics, both in new solutions as well as new opportunities. We feel confirmed in going ahead full speed in realizing our sustainability program." 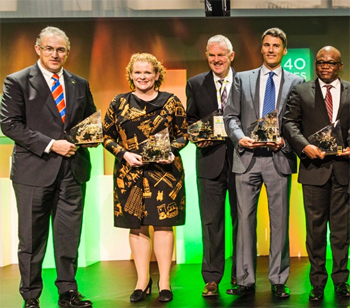 Rotterdam mayor Ahmed Aboutaleb (left) with other winners of the C40 cities awards.

For the 2015 Awards, the organization received 200 entries from 94 cities around the world. Cities were nominated and awarded in ten categories.

Read more on the C40 Cities Awards at www.c40.org/awards.

This news item was originally published on the website of Rotterdam Climate Initiative.