On invitation of the Philippine government, the Dutch Risk Reduction (DRR)-team visited Manilla and Tacloban early July to assess the possibilities to protect the coastline in and around Tacloban by creating hard engineering works, planting mangrove trees and reclaiming land.

Tacloban was the worst-hit city by typhoon Haiyan in November 2013, in which 6,000 people died and millions were made homeless.

Following the scoping mission the team will write an assessment report on how to proceed as requested by the national Philippine government and the Dutch Government.

People in Tacloban are rebuilding their improvised shelters on the coastline, disregarding the official no-build zone of 40 meters.

More southern path by typhoons
Eight months after the typhoon, with an approximate 6 m high storm surge hitting the Tacloban area, the citizens are still busy restoring their houses and livelihood. The undermined sea wall has not yet been repaired (top photo).

"The housing conditions are still very poor and many people live in tents", reports Ir. Tjitte Nauta, one of the team members.

"The Philippines are all too familiar with destructive typhoons but normally they hit the country in the more northern part. In recent years the typhoons tend to follow a more southern path. As Haiyan passed just south of Tacloban the extreme high winds set up a storm surge over the shallow coastal waters, pushing it over the low lying part of the city. The shallow coastal waters and the funnel shaped Gulf of Tacloban are a particular aspect of the flood risks for Tacloban, but in general the whole east coast of the Philippines is at risk." explains Nauta.

Overall flood risk assessment
In Manilla the Dutch DRR-team talked to the national authorities among others about possible improvements of the hazard maps, weather forecasting and early warning systems. "There have been quite some efforts but we still see great possibilities for further improvements. For instance by making a more advanced assessment of flood risks as caused by typhoons and tsunamis", adds Nauta. 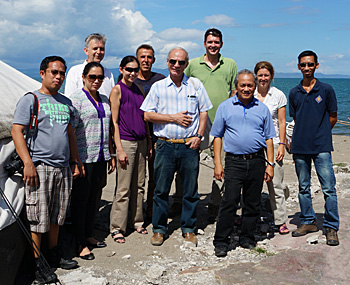 The DRR-team and escorts in Tacloban. Left in the back row is Tjitte Nauta of Deltares.

Restoration of mangroves
During the field visit the team gathered information to be able to advice on potential flood risk reduction options for Tacloban. "It will be a mix of hard civil engineering constructions, land reclamation and enhancing the more natural protection by mangroves", continues Nauta.

"The authorities have already reserved budgets to restore the mangroves that were destroyed by Haiyan, but we have suggested to extend mangrove forests to other flood vulnerable coastal areas as well. In the Netherlands we have experience with techniques to capture sediments, which may be beneficial in making the replanting of mangrove plantations in the Philippines more successful."

Nauta points out that Wetlands International also participated in the DRR-team. "They are highly experienced with coastal nature conservation and, with us, involved in successfully restoring degraded mangrove forests in among others Indonesia."

Land reclamation
"Following the initial ideas of the Philippine Reclamation Authority, we have also been looking into the possibility of land reclamation as an option to create more space for the coastal communities in Tacloban." Nauta refers to the no-build zone of 40 m along the coast, as declared by the authorities just after the disaster. "This did not work as many people, like fishermen, rebuild their homes direct at the coast again. The idea of land reclamation provides an opportunity to construct a new, more robust, coastal zone and at the same time may be financially attractive due to all sorts of possible commercial activities."

"New land can attract private investors", concludes Nauta, "so it can create additional funding to finance an overall coastal protection plan. All together, we feel that there are great opportunities for the Dutch water sector to help develop this typhoon struck area and make it more resilient. The Dutch DRR mission was much welcomed and supported by all parties consulted."

About DRR-facility
The Dutch government initiated the Dutch Risk Reduction team in 2013 to meet the demand from other governments for advise on urgent water risks such as flooding.

The DRR-team operates in addition to these on going cooperation projects, especially addressing urgent water issues. Formal requests for the DRR-team are handled through the local Dutch embassies. Preliminary contacts have been established with some countries.

DRR-team's first call out was to Mexico in March 2014.