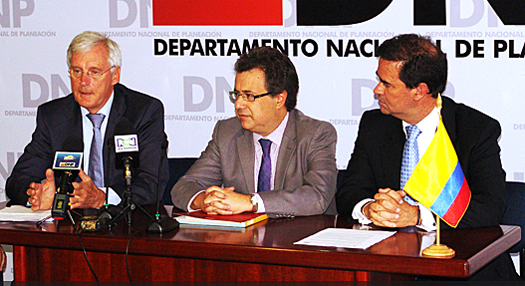 During his visit to Colombia the Dutch minister Ben Knapen (left on photo) of international affairs met with director Mauricio Santa Maria (middle) of the National Department of planning (DNP) and Colombian minister Frank Pearl (right) of environment on June 19.

They agreed on the establishment of the Holland Water House in Bogota.

Long term river basin plans
The new centre will assist the Colombian water authorities in developing a long term water management plan for the river basins of the Magdalena en Cauca. The Dutch-Colombian cooperation will also include some short term river restoration projects.

The director of the National Department of planning announced that the Dutch government will contribute2 million euros. The financial aid is seed money to start up the agreed river restoration projects.

Personal initiative by Colombian president
The Netherlands enjoys a good reputation in the Colombian water sector, due in part to a development relationship on environmental issues that goes back many years. In the 1970s, the Netherlands financed various studies on water management in Colombia.

Following the heavy flooding in December 2010 the Colombian president Santos personally strengthened the relation with the Dutch water sector, leading to a joint water conference in July 2011 and the signing of a memorandum of understanding in December 2011.
(read more on this agreement: Colombian and Dutch government sign MOU on integrated river basin management for Magdelena and Cauca rivers)

From aid to trade
The meeting between Knapen, Santa Maria and Pearl was part of a Dutch trade mission with 12 companies. The Dutch government is focusing its development policy on economic growth and self-reliance is turning aid into trade in Colombia.

"In the interests of both our countries, I am keen to reach an agreement on cooperation and on moving from development cooperation to a bilateral economic relationship", Knapen said.