Sealand Eagle became the first container vessel to call the new Maasvlakte 2 expansion of the Port of Rotterdam on 17 December.

The vessel made a short journey from the existing APM Terminals Rotterdam terminal to the deep-water quay at the new APM's Maasvlakte 2 terminal to reposition empty containers as part of a volume test.

Next deep-sea vessels
Further deep-sea vessel calls to the terminal at Maasvlakte2 are planned for January 2015, in preparation of the full commercial opening for regular weekly operations in February 2015.

The facility began landside commercial operations with the opening of the truck gates and rail terminal in November 2014. 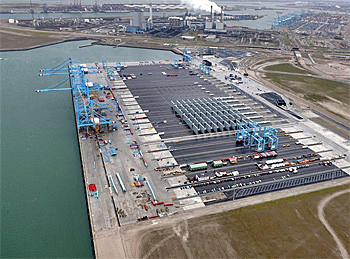 The terminal will provide an annual container throughput capacity of 2.7 million TEUs.

To support this capacity, it will be equipped with 3 barge cranes and 62 automated guided vehicles (AGV) to transport the containers to 154 storage racks.

The rack installation will begin in February 2015, with vehicle deliveries beginning mid-year. 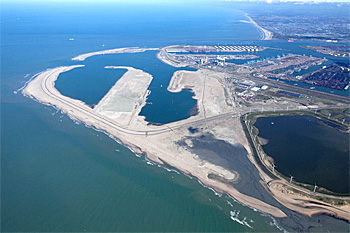 About Maasvlakte 2
Maasvlakte 2 is the extension of the port of Rotterdam with a new 700 ha deep-sea port created in the North Sea at -17 m depth.

Construction started in 2008 with a land reclamation of around 2,000 hectares. The reclamation project was concluded in 2013.

With a depth of 20 metres, the port is accessible for deep-draught container vessels, to be handled at the first two new container terminals of Rotterdam World Gateway Container Terminals and APM Terminals.

More terminals will be constructed when additional port capacity is demanded.

This news item was originally published on the website of APM Terminals.

Animation of handling of containers at new APM Terminals Maasvlakte 2.