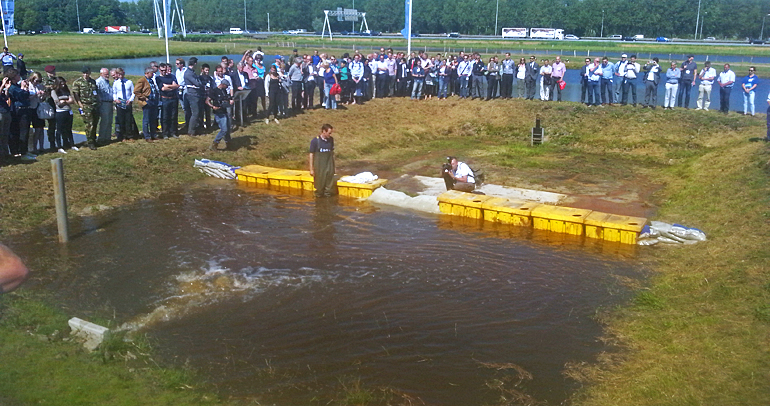 The concept of a test facility for innovative temporary flood defence barriers has proven so successful that within its first year the location of Flood Proof Holland in Delft, the Netherlands had to be expanded.

The test facility was officially reopened on 3 July and now accommodates six stand-alone floodable 'mini-polders' for real life testing of new temporary flood defence systems. The enlargement was realised by the Engineering Regiment of the Royal Netherlands Army.

Bigger playground for flood fighters
"We discovered that manufacturers are in need of a testing ground where they can work in a controlled environment to experiment and modify their new technologies", explained Marjan Kreijns on occasion of the reopening.

Kreijns is head the Valorisation Centre of TU Delfland and team leader of the test facility. She continued: "Last year we started with three flood barrier manufacturers and three mini basins. They have tested their new barriers under real life conditions and were supported by students from the neighbouring Delft University of Technology and by flood defence experts from the neighbouring research centre Deltares."

According to Kreijns the playground for flood fighters draw much attention right from the start and thus quickly attracted more manufacturers. 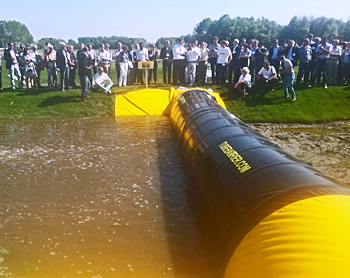 New on the test ground is the TubeBarrier that has already been sold to a Danish museum for specific flood protection.

Good alternatives for sand bags
Director Gerrit-Jan van de Pol of GMB International - together with BAM Infraconsult the two joint partners of the modular BoxBarrier flood defence system - affirmed the importance of the facility. "New temporary flood defence barriers are a good alternative for the classic sand bag. In fact, they are cheaper and easier to deploy", Van de Pol said.

He told that the testing facility speeded up the further development of the Boxbarrier. "To test our product we cannot wait for a real-time flood event. That would take too long. So simulating the circumstances of a flood in a controlled environment is an excellent alternative."

Van de Pol said not to worry about sharing the same facility with his competitors. "It is generally known that car dealers sell more when they cluster in one area. The same applies to temporary flood defence barriers. The fact that this facilities shows different systems creates more publicity and attracts more people." 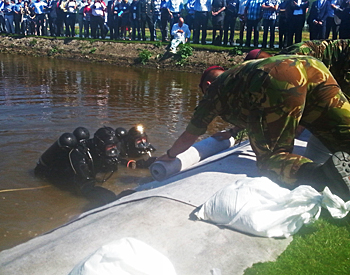 Divers of the Dutch army demonstrated the underwater enforcement of a levee with the special hydrating Briposan geotextile of BNP Brinkman.

Central European depot
As one of the founding fathers, chairman Michiel van Haersma Buma of waterboard Delfland took the opportunity of the re-opening to make an appeal to the European Union. He urged the EU to start thinking about a central depot for temporary flood defence equipment. "It is my dream that one day we have such a depot. In case of a serious flood event anywhere in Europe, we can bring in the necessary flood defence equipment from such a depot", Haersma Buma said.

About VPdelta
Valorisation Program Delta Technology & Water (VPdelta) is a program that takes the cluster of delta technology and water as starting point for promoting and advancing innovative initiatives.

The program aims to endorse collaboration between (starting) companies, research and educational institutions and governmental organizations that are active in the field of delta technology and hydraulic engineering.