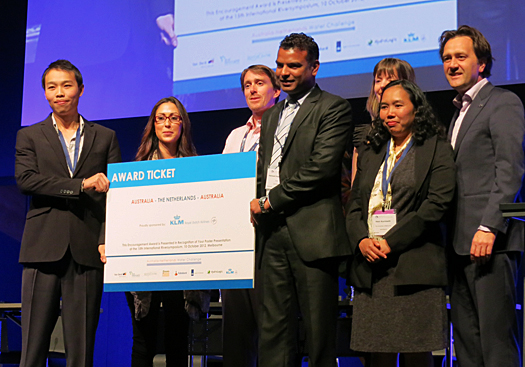 Winner Australian master student
While all presented ideas will be taken forward for further development in the coming months, it was Kevin Loh (far left), Masters student in Integrated Water Management at the University of Queensland, who was announced winner by jury chair Frank Heemskerk (far right), Executive Board Member of Royal HaskoningDHV.

Smartphone app to report flood damage
Kevin's proposal for a smartphone app that would greatly expedite the handling of insurance claims after a flood event, reducing both psychological and economic damage, was judged to have great potential.

Kevin was invited to further develop his app in the Netherlands and was presented a return ticket, sponsored by KLM Royal Dutch Airlines. 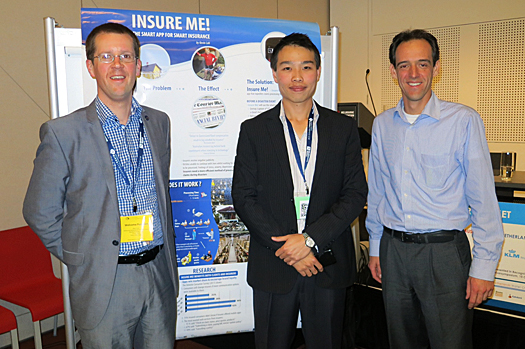 Winner Kevin Loh (middle) in front of his poster presentation together with Gregor van Essen (right) of BlueSpring and organizer of the Holland Water Challenge and Paul Hart (left) of RoyalHaskoningDHV and one of the main sponsors of the challenge.

Inspiring future generation water professionals
The Australia-Netherlands Water Challenge is part of the Holland Water Challenge programme, a joint initiative of the Dutch water sector, that aims to educate and inspire future water leaders around the world.

Similar competitions with water students took place in China and Singapore. The next challenge is to take place in Singapore.

The programme in Australia is a joint initiative with the International Water Centre in Brisbane. Participating Dutch organisations are Van Oord, Royal HaskoningDHV, Fugro, Netherlands Embassy, Rabobank, KLM and HydroLogic.