During the storms in January and February, waves of up to 7.7 m washed away large amounts of beach material and sections of the sea wall.

The work was carried out on behalf of  Weymouth & Portland Borough Council and the Environment Agency. 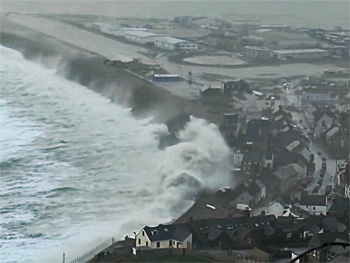 Beach levels reduced up to four metres
Heavy winds and strong tides hit the Dorset coast hard during the winter period, damaging sections of the wall and stripping Chesil Beach.

Beach levels were reduced by up to four metres, exposing the foundations of the sea wall and without repair work this increased the possibility of further damage.

Rebuilding and strengthening work took place over the last few months including sheet piling and a mixture of concrete and rock armour to offer further protection and stability to the wall.

Other work included repairs to the slipways used by fishermen, fixing handrails and repairing surface damage such as minor cracks.

Work started quickly due to the borough council and the Environment Agency agreeing to use the same contractor and around 300,000 UK pounds being made available from central government’s emergency repair funding. 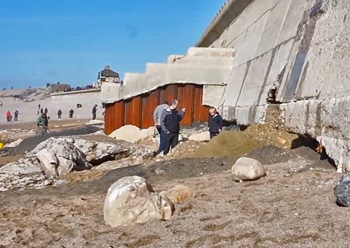 Damage to the foundation of the sea wall at Chesil beach.

Back to original level of protection
Ben Murray, Head of Infrastructure at Weymouth & Portland Borough Council, said: "It is great news that the sea wall is now fully repaired and open to the public. The work was crucial to ensure the sea wall continues to offer the same level of protection it was designed for prior to the storms.

“All the work has been completed with minimum disruption and with no incident and we would like to thank the public for their patience while the work took place."

The Environment Agency is continuing to repair and replenish Chesil Beach at Chiswell. These works are expected to be finished in the next few months.

Once these repairs are complete it will ensure flood defences are back up to their original level of protection.

The borough council will continue to monitor the beach levels.

This news item was originally published on the website of Dorset Councils.

On 6 February 2014, Chesil Beach, Portland suffered its greatest storm in 35 years, but the 50 years old sea wall and the flood defences kept the town of Chiswell from being deluged.