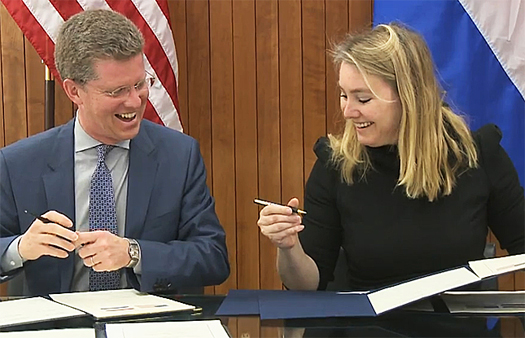 Age-old shared problems
"Our two nations have much to learn from each other about finding innovative solutions to age-old shared problems," said Donovan. "The Dutch are no strangers to the forces of nature and I’m certain we can benefit from their experience in disaster mitigation, infrastructure management and a variety of approaches to sustainable community development and planning."

Signing of the MoU by Melanie Schultz van Hagen and Shaun Donovan, followed by a short press meeting.

Vulnerable river deltas
"Although the scale of our landscapes differs, New York and the Netherlands have a lot in common," said Minister Schultz. “Both areas are river deltas. Both areas have estuaries, rivers and water basins that are vulnerable to flooding. The Netherlands has a long history in water management, but I am not coming only to bring Dutch expertise. I am also coming to learn from the American approach."

Five years cooperation
The HUD-Dutch Memorandum of Understanding lays out certain areas of cooperation over the next five years including:
- creating new community development strategies that place a premium on sustainability and ‘livability’ principles;
- pursuing infrastructure and water management strategies and climate resilience and preparedness, including new approaches to flood protection systems and ‘building with nature;’ and
- leveraging private and philanthropic investments to maximize public investments in urban development and long-term disaster mitigation.

Both governments will prepare a concrete action plan.

This news item was originally published on the website of the Royal Netherlands Embassy.

More information
Ministry of Environment and Infrastructure
The Hague, the Netherlands
+31 70 456 00 00
www.government.nl/ministries/ienm