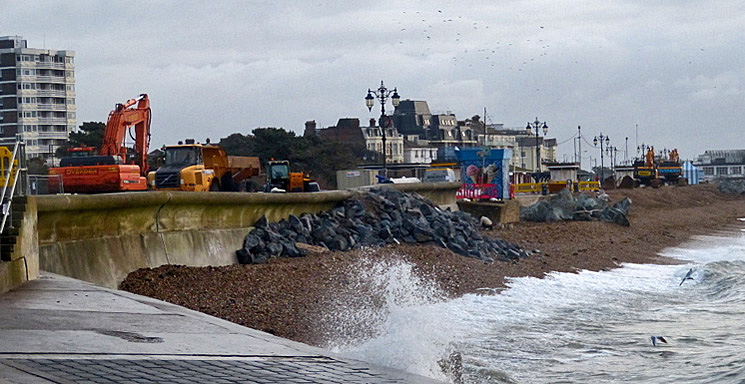 The team that carried out emergency repairs to the sea defence wall in Southsea, UK, over the Christmas holiday period has been praised by the Portsmouth City Council.

In a letter to contractor Team Van Oord, Portsmouth councillor Donna Jones said she “wanted to put on record how impressed we have been with the whole response”.

Team Van Oord was called into action to support the Environment Agency following the collapse of a stretch of the sea wall at Southsea, UK, on 28 December 2015. 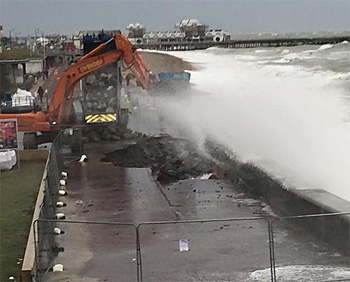 Gaping hole
The breach occurred when waves crashed over the top of the wall and penetrated the foundations, causing the concrete to expand and split the structure. A gaping hole appeared in the pavement of the promenade.

Following some immediate repairs directly after the storm, the hole has now been plugged with tonnes of rock to shore up the sea wall and prevent further beach erosion.

Swift response
Councillor Jones said: “We are writing to personally thank you for your swift response in repairing the damage. We are conscious that the issue occurred during the festive season and are very grateful to the individuals who gave up their holiday time to carry out the emergency repairs at such short notice.

According to Jones the council has been impressed with the whole response including the initial assessment of damage and safety precautions that have been undertaken.

Not a nine to five job
Responding, Tony Camilerri, MD of Team Van Oord member Mackley, said: “We appreciate Councillor Jones’ comments and thank her for taking the time to record the council’s appreciation for our efforts."

“Dealing with the risk of flooding and the consequences of storms and extreme weather is not a nine to five job. We are on standby 24 hours a day, 365 days a year – that is the nature of our work."

A news report by Solent TV on the repair works.