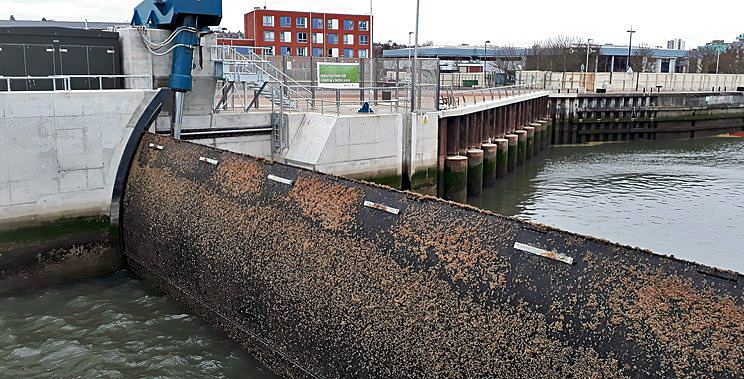 Environment Agency’s new tidal flood defence barrier for Ipswich has been officially opened and will better protect homes and businesses in Ipswich over the next 100 years from the increased flood risks associated with climate change.

The flood barrier’s centrepiece is a 200-tonne rotating gate that moves upwards out of the sea floor into the closed position.

The flood barrier has been built by VBA - a joint venture between VolkerStevin, Boskalis Westminster and Atkins - as main contractors and the 9 m tall gate has been constructed in Rotterdam by Hollandia. 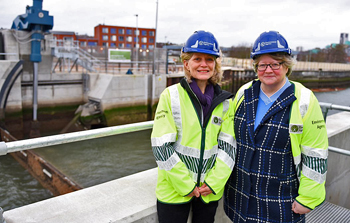 Sea level rise
The flood gate has a design similar to that of the Thames Barrier and meets the protection standards based on the government’s most recent prediction that sea levels could rise by up to 1.15 metres, increasing the risk of tidal surges affecting those living on the coast.

The barrier gives a better flood protection to more than 1,600 homes and 400 businesses in Ipswich for the next hundred years.

Boost to local economy
Aside from this protection, Ipswich’s new flood defence scheme has the added advantage of helping to boost the local economy through freeing up hectares of land for regeneration. 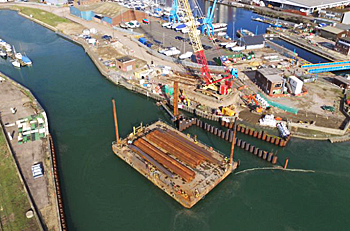 One of the first activities by VBA was the construction of piled flood defence walls on either side of the entrance of the navigation channel.

On the occasion of the official opening Floods Minister Thérèse Coffey said: "This important new flood scheme, which has received nearly 55 million pound of government funding, secures the future of hundreds of local businesses whilst creating 4,000 jobs to boost the town’s economy."

"I am delighted the Government is investing so significantly in the county town of Suffolk and its future prosperity", Coffey said.

Local cooperation
Environment Agency’s chair, Emma Howard Boyd, highlighted the close cooperation with local parties. "The Environment Agency worked closely with the local community, the council and businesses to design and build a scheme that provides a greater level of protection for the town."

According to Howard Boyd the scheme is an important step forward for the six year, 2.6 billion flood investment across the whole country.

This news item was originally published on the website of UK government.