On its way to the port of Hamburg, the 400 m long container ship stranded on the Elbe river, due to a technical failure around 25 kilometers ahead of the port.

The two Dutch dredging vessels participate in the preparation for the next salvage attempt by removing it's hull from sand. 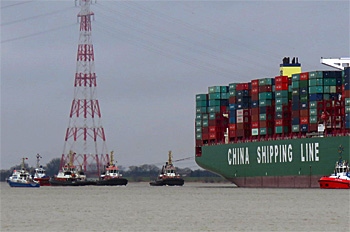 Salvage attempt with seven tugboats
The 19,000 TUE-vessel Indian Ocean suffered a technical failure on the navigational channel of the Elbe to the port of Hamburg.

The pilots steered the ship to the side of the channel to keep it free for other vessels.

Two attempts of moving the Indian Ocean with the help of six respectively seven tugboats failed.

The Central Command For Maritime Emergencies Germany (CCME) took over the incident command and initiated additional help through bearing ships and a suction dredger.

To make the vessel lighter, some heavy fuel oil was pumped out already.

Once the 800 tonnes of heavy fuel, as well as 570 tons of gasoil, had been removed to make the ship lighter, and after the removal of sand, the tugboats will give it a try during spring tide on Tuesday.

Video recording of the stranded Indian Ocean and the presence of hopper Barent Zanen and water injection dredger Njörd.