Van Heck Group has won the contract to supply eight HK700 pumps to Hyundai Engineering & Construction for phase three of the New Port Project in Qatar.

The pumps will be used, for a scheduled period of 20 to 30 weeks, to return the process water used in dredging through a series of sedimentation ponds back to the open sea. 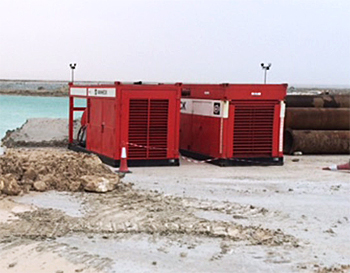 Van Heck supervisors will also be assisting on site with the installation of the pumping system.

About New Port project
In 2007 His Highness Sheikh Hamad Bin Khalifa Al Thani, Emir of the State of Qatar, initiated the construction of one of the world's largest greenfield port located south of Doha.

The 7.4-billion USD development will span a 10-square-mile (26-square-kilometer) area and include a seaport, a base for the country’s naval forces and an economic zone.

Developed in three phases, with a container terminal able to accommodate up to two-million, 20-foot (6-meter) equivalent units, the project is scheduled for completion in 2016.

This news item was originally published on the website of Van Heck Group.

A 23 minute documentary on the New Port project by Qatar TV.