The client, Taiwan International Ports Corporation (TIPC), awarded the contract in 2015. The work was completed eight months ahead of schedule. 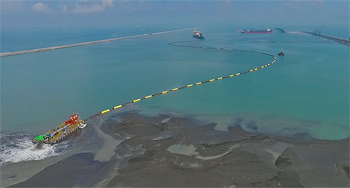 The land reclamation was completed in an area surrounded by huge concrete walls, making the dredging work complex.

International project team
The port expansion was the first time Van Oord had been engaged as a main contractor in Taiwan.

Area Manager Martin Meijers at Van Oord: ‘The availability of the right equipment at the right moment and excellent cooperation within the internationally assembled project team contributed to the early completion and overall success of this project.’

Taiwan’s largest port
The new land will accommodate many terminals and wharves, some of which will be able to handle container vessels of up to 22,000 TEU.

According to Taiwan International Ports Corporation, the Port of Kaohsiung is Taiwan’s largest port. Each day, around 150 vessels pass through the port, where more than 10 million containers are transhipped each year.

Kaohsiung is Taiwan's second largest city and centre of the country's heavy and petrochemical industries.

Video report on the international cooperation and the complexity of the dredging work.