The 36 million UK pound scheme by the Environment Agency involves demolishing a number of existing timber and concrete groynes along the frontage. 22 Fishtail groynes and a terminal groyne will be built in their place.

The project also includes a beach recharge of 950,000 m3 of material with rocks being brought in by sea from Norway. 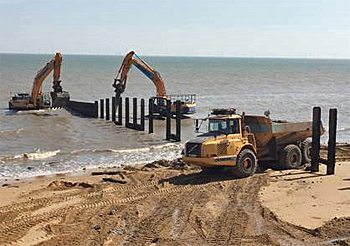 Vital boost to seafront
The scheme has been described as a vital boost for regenerating the seafront as well as protecting more than 3,000 homes and commercial properties for the next 100 years.

Work will carry on throughout the summer and into autumn this year and starts up again in spring 2015 with completion targeted for autumn 2015.