What are you looking for?
News 1 September 2011

West 8 is one of the three finalists vying to design new St. Petersburg Pier 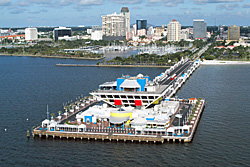 The Dutch landscape architecture firm West 8, after knocking out 20 other competitors around the world, become one of the three finalists vying to design a replacement for the new St. Petersburg Pier, which has been the centerpiece of the city since it's opening in 1973. The selection panel on Friday 19th Aug announced this news.

Final presentation remaining candidates
Only three firms are in the running now. The other two competitors are Bjarke Ingels Group, or BIG, a Danish firm and New York base firm Michael Maltzan Architecture. The city council is scheduled to hear a presentation on the three firms at a meeting September 8.

Jury in favor of innovation
The panel, or public jury, that chose the three comprises three professionals in architecture and design, and two public officials, County Commissioner Ken Welch and City Councilwoman Leslie Curran. They seemed to favor the innovative. Susan Fanstein, a jury member, and a professor at Harvard's Graduate School of Design, thought West 8's design work was "really handsome."

Final recommendation to city
When the city council approves the finalists on 8th Sep, the three will submit design concepts for a new pier by Nov. 29, with presentations in December. Then the panel that chose the three will make a final recommendation to the city council, which will then vote on Feb. 2. Roughly 50 million dollar has been designated for the structure that will replace The Pier.

This news item was originally published on the website of West 8 .