(editiorial) The Dutch water sector has a promising new year ahead. 2015 holds a challenging agenda for tackling the world's most important water issues: too much, too little, too polluted.

In April the global water community will address the issues at the 7th World Water Forum in Korea. In September the United Nations is expected to make a paramount step forward solving these issues by adopting the post-2015 sustainable development goals, including the dedicated water goal nr.6.

Many Dutch water experts are already involved in the preparatory processes of these two major events, contributing to a successful outcome. And finding new ways to jointly address these big challenges.

Dutch highlights
Two specific highlights on the 2015 agenda of the Dutch water sector are the Third UN World Conference on Disaster Risk reduction (WCDRR) in Sendai, Japan in March, and the Amsterdam International Water Week (AIWW) in November. 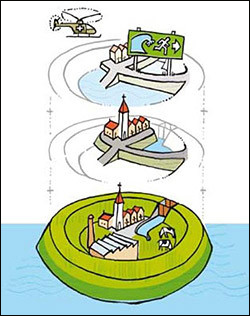 Building on its excellent reputation in flood prevention, the Dutch government wants to make all its knowledge widely available, so other low-lying and densely populated river deltas in the world will become more resilient too.

Water experts from all over the world will join in Amsterdam to attend the world's leading trade fair on water treatment, Aquatech Amsterdam, and to attend the two-day top conference that will focus on innovative water concepts for a circular economy, seeking new solutions for sufficient water supply without depleting natural resources.

Resurfacing news in 2015
To see what else 2015 has in store, it takes a reflection on last year's highlights. At home these included the opening of the world's first RED power plant driven on fresh-salt water mixing and the world's first Six-CeraMac plant for pretreatment of drinking water.

Following in the footsteps of the international successful Nereda waste water treatment technology, the Dutch innovative water technologies will continue to resurface amongst the news development in 2015. 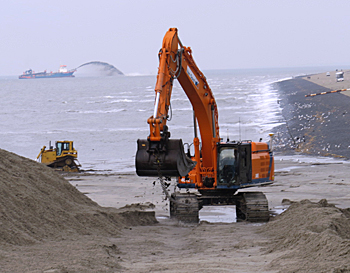 Seaside dike enforcement work on the Hondsbossche Zeewering, the Netherlands, in full force and expected to be ready soon.

Suez canal expansion
Also resurfacing in 2015 will be the involvement of the two leading Dutch dredging companies Van Oord and Boskalis in the New Suez Canal. Both companies are part of a consortium that won a large contract from the Egyptian government last year.

An enormous amount of equipment from around the world is directed to the Suez canal as the Egyptian government wants the 4 billion USD expansion project to be ready by august 2015.

Indonesian president Joko Widodo has always been a strong supporter of the plan so new developments will surely emerge in 2015. 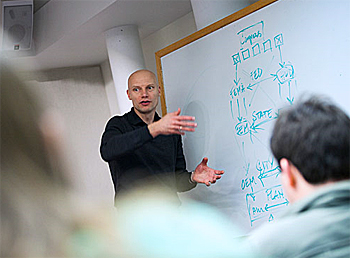 Rebuilding by design
Dutch consultancy and architect firms did very well in the Rebuild by Design competition organized by the Obama administration after super storm Sandy hit New York.

The winning proposals are considered as blueprints for communities to maximize resilience as they rebuild and recover from major disasters.

The design competition was led by Dutchman Henk Ovink who was specially detached to the Hurricane Sandy Rebuilding Task Force.

2015 will bring a further international roll-out of this Rebuilding by Design concept for flood risk reduction.

Water supply and sanitation is more than just fixing a tap.

Sustainable water supply for all
United Nation's theme for 2015 is water & sustainable development focusing on fresh water as a critical factor for social and economic development.

The 2015 theme links to the idea of universal access to clean water and adequate sanitation, but additionally addresses the sustainable use of water resources for various purposes.

The Dutch water sector has developed a special focus on sustainable water services. Lasting water supplies is not only about constructing new water facilities, but also is also about operational skills, proper maintenance and financially sound management.

Dutch civil society organisations related to water issues, organised in the Dutch WASH Alliance, have obtained valuable experiences with sustainable water services in developing countries and will continue to share these at all major 2015 meetings of the global water community.

Additionally the Dutch water sector will actively campaign for universal access to water also in schools, clinics and at work in 2015

The Dutch water sector is very much aware that water does not stop at borders and invites everybody to team up in 2015 for the development of long term solutions.