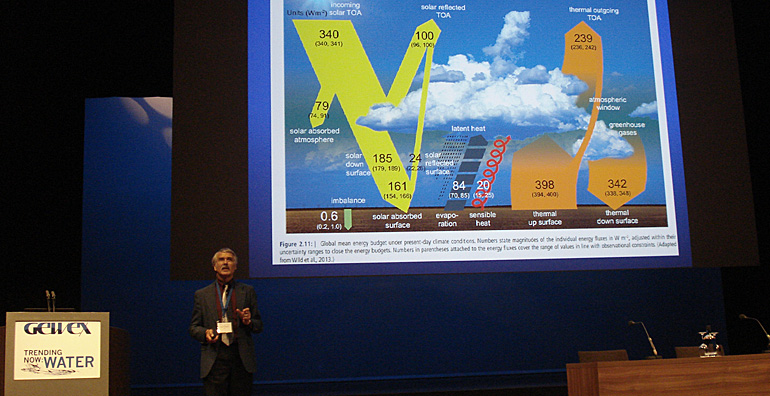 Over 500 climatologists, meteorologists and hydrologists from all over the world gathered at the 7th GEWEX conference in the Hague, the Netherlands on 14 – 17 July.

This year's edition was hosted by Wageningen University and has the theme 'Trending now: Water'

The conference started off with a depth discussion on how much water actually evaporates and precipitates over land and over oceans.

Overall, the global water cycle is closed but the plenary opening of the conference made clear that there still is a 22% variation in the amount of global rain fall depending on the model that is used. 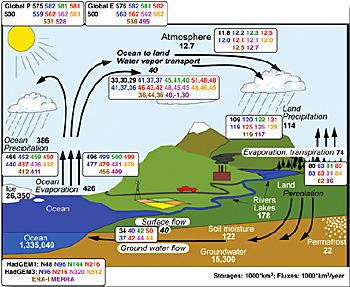 Inaccuracies or fundamental faults
The opening plenary made clear that the scientific community has made big progress in understanding the relations between the global energy and water cycles.

However, uncertainty remains over the exact amounts of global precipitation and evaporation. The question emerged whether the variation in the models is caused by shortcomings in the available data sets or by fundamental faults in the models.

NASA's remote sensing specialist William Rossow pointed out not be interested in the exact figures, except when there is something structural missing. "We have to know whether the ingredients are right", Rossow told.

He speculated on the influence of clouds with a cooling effect on the earth's surface and decreasing evaporation. "For a better understanding it is important to have better data on earth's skin temperatures".

Trapped heat mainly into oceans
The 7th GEWEX conference celebrates 25 years of a research project of the world climate community to get better understanding of the coupled hydrologic and atmospheric processes on a global scale.

When the GEWEX-programme started, there were hardly any usable data sets and models to quantify the hydrologic cycle and energy fluxes. Over the years scientists from over 45 countries participate in major GEWEX projects and today the effects of global warming on the global water cycle are much better understood and the changes can now better be quantified.

Senior scientist Kevin Trenberth (top photo) of the US-based National Center for Atmospheric Research (NCAR) explained in his opening lecture that the additional heat that is trapped in the atmosphere, is mainly absorbed by the oceans, especially in the deeper parts under 300 m. 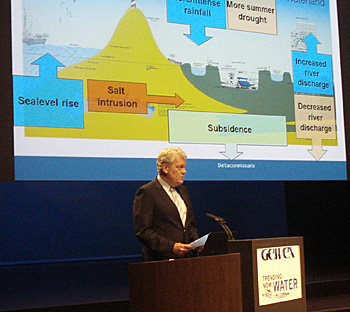 Future trends
Also speaking in the opening plenary was Dutch delta commissioner Wim Kuijken (photo left). He encouraged the climate experts to continue their research to get a better understanding of future changes in extreme weather events, especially related to the availability of fresh water.

Kuijken told his audience that the Netherlands is about to adopt a new water policy that builds on adaptive strategies and 'step-by-step' measures to balance water supply and water demand.

About GEWEX
The Global Energy and Water Exchanges Project (GEWEX), a core project of the World Climate Research Programme (WCRP), brings together the world climate community in joint initiatives to advance understanding of the coupled hydrologic and atmospheric processes on a global scale and to apply global water cycle understanding, observations, and models to the problems of climate and water resources around the world.