Adaptation Futures 2016: A look back on the biggest climate adaptation conference ever 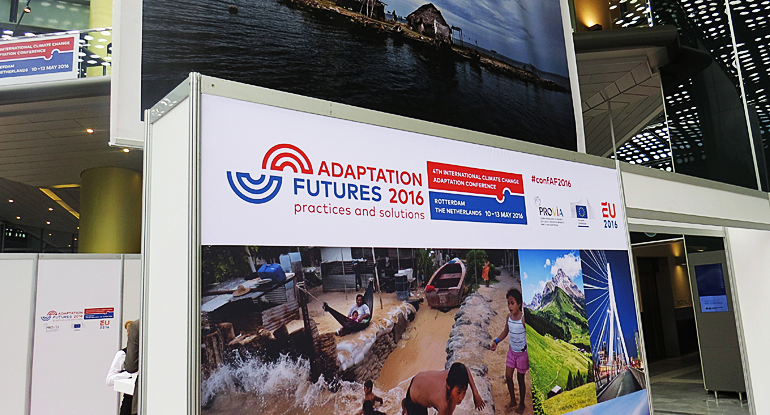 The 4th international climate change adaptation conference took place in Rotterdam, the Netherlands, from 10 to 13 May.

Following previous editions in Australia, the United States and Brazil, the conference was hosted for the first time in Europe.

Attended by 1700 delegates from 107 countries, it was the biggest conference ever held on adapting to climate change. 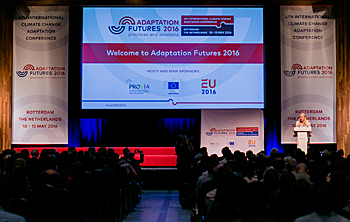 Road from Paris
The conference showed that scientists, policymakers, practitioners and businesses were clearly inspired by the outcome of the Paris climate agreement that, for the first time, recognized the need to adapt to climate change, next to the mitigation to low-carbon energy sources.

Unlike in Paris, the aim of the Rotterdam meeting was to share knowledge. To discuss successful and less successful examples of climate adaptation. And how to get from nice looking plans to concrete action, making communities more climate resilient.

Many speakers made clear that climate adaptation is no goal in itself. It is about on-going development, taking the effects of extreme weather events into account.

Unknown risks
In many presentations and panel debates it was mentioned that climate adaptation has no clear goals. Compared to mitigation that has CO2-emissions, adaptation is much more complex.

Many presentations were about pathways, risk reduction, stakeholder participation and liveability.

It was recognised that politicians, investors and businesses want workable cost-benefit analyses. In order to be accountable they want to know what can reasonably be expected from them. 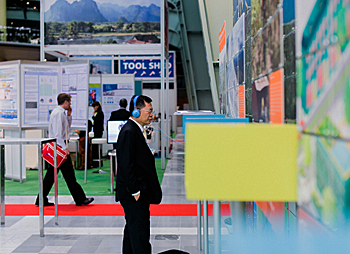 Linked to poverty
Climate change will hit the poorest the hardest, so adaptation is ultimately linked to poverty alleviation. Poor communities are in the surviving mode and lack money to invest in measures that will benefit them in the future. Financing and bankability were key issues at the conference, as addressed by Dutch queen Maxima.

Each dollar invested in disaster preparedness, saves seven dollars in recovery, said Dutch minister Melanie Schultz van Haegen during the opening session. Yet, it proofs difficult for private actors to invest in resiliency. Especially in poor countries where disasters, such as floods and droughts, have a big economic impact and set back development.

"It is the tragedy of the horizon", said Michael Wilkins of S & P rating services, meaning the climate adaptation is about avoiding long term risks, whereas most financers and businesses have a scope of only five years for their return on investment.

Road to Morocco
In November the next climate summit, the COP22, will take place in Marrakesh, Morocco and the climate adaptation community is challenged to make a next step forward.

Identifying risks, climate budget markers and upfront benefits accounting, were some of the issues mentioned to be further developed on the road to Morocco.

During the closing plenary, emeritus professor Ian Burton called upon the delegates to be more radical and take the issue to a higher level. "We need to start thinking on climate adaptation as an issue of global development."

Below a selection of photos, giving an impression of the conference. 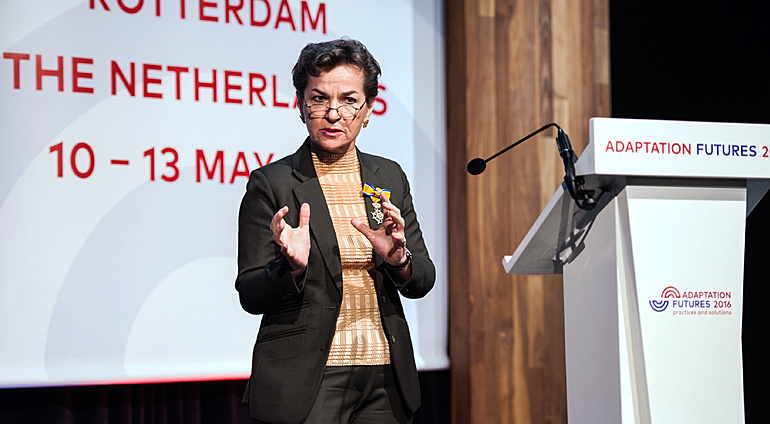 The day after the Paris agreement Christiana Figueres, secretary of the UN climate council, swallowed an alarm clock. There is only five years left for a radically change in all of what we are doing, she warned at the opening plenary. In order to stay below a 1,5-degree temperature rise, the atmosphere can take up only 600 giga tonnes more CO2. Her warning clearly impacted the conference.
Figueres became emotional when she mentioned the effects of climate change on individuals. A single mother whose home was washed away by a flood, a pregnant woman suffering from the droughts and a young girl without drinking water as salination contaminated the local fresh water source. 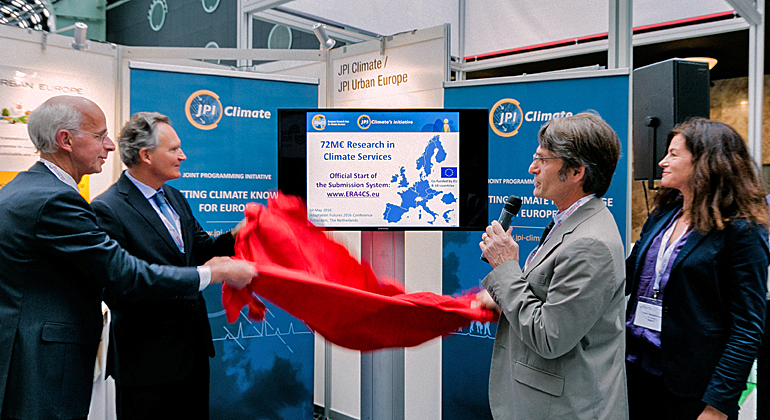 European Commission’s Director general for research and innovation, Robert-Jan Smits (second left), Dutch Ministry of infrastructure and the environment, Director general Peter Heij (left), and chairman of JPI Climate Patrick Monfray (second right), gave the official 'go' to submit proposals for the joint call of the ERA4CS programme.
This new EU flag ship research programme has a budget of 72 million euro to boost the development of efficient climate services in Europe, by supporting research for developing better tools, methods and standards on how to produce, transfer, communicate and use reliable climate information to cope with current and future climate variability. 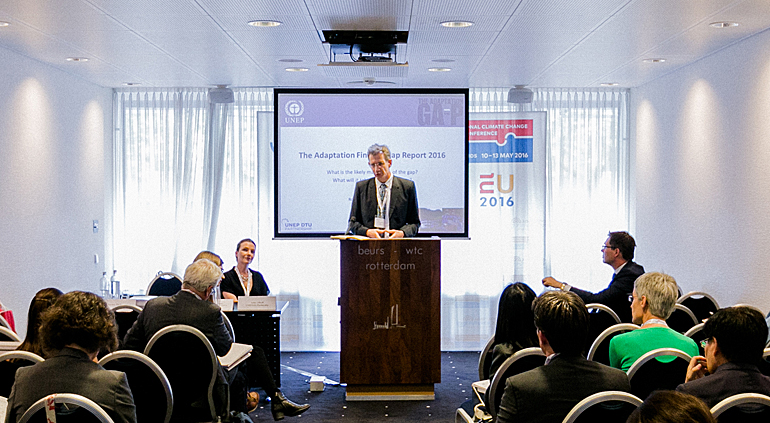 The United Nations Environmental Programme (UNEP) launched an updated report on the financial needs of developing countries to cope with the effects of climate change. The previous 2014 report mentioned a difference of 100 billion dollar annually between the finance made available by the developed countries, on the one hand, and the adaptation needs in the developing countries on the other.
This new UNEP-report suggests an under estimation and warns that the gap can grow upto 500 billion dollar annually by 2050. At the press conference Barney Dickson (middle) of UNEP admitted the large uncertainties but said this was the best assessment possible at this moment. If half of the 100 billion dollar Adaptation Fund can be spend on adaptation, as agreed in Paris, the fund will fill the gap only upto 2020, Dickson predicted. 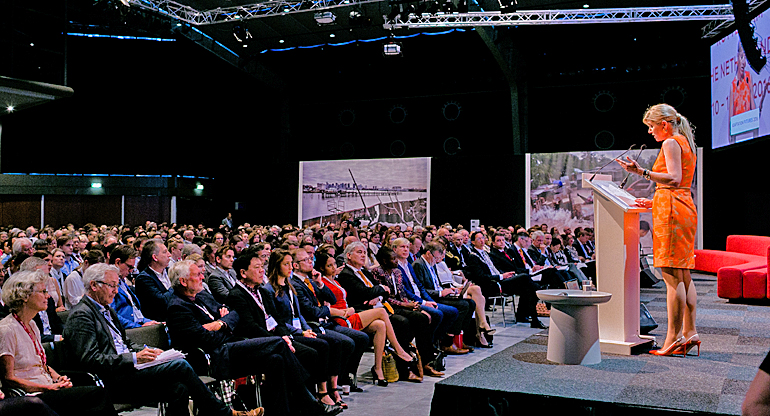 Key note speaker on the second day of the conference was Dutch queen Maxima with an inspiring speech on universal access to financial services. In her role as UN secretary-general's for inclusive finance for development, she urged for opening up financial services to the poor. Insurances and loans are crucial for a quick recovery after a disaster, she said. There is a big potential for these service if the telecommunication sector can make them available via mobile phones. In countries such as Kenya, Tanzania and Uganda an app has shown how easy it can be for poor people to get access to solar energy. 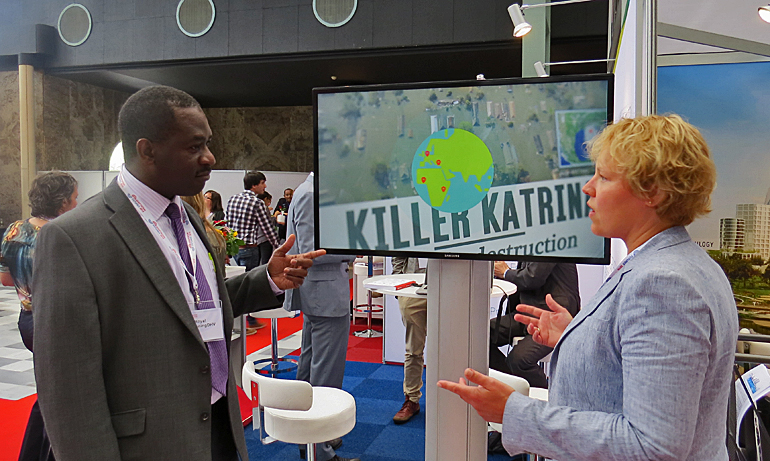 Hanneke Schuurmans (right) at Dutch consultancy firm Royal HaskoningDHV demonstrated at their booth what modern communication technology can contribute to reduce the impact of extreme weather events. Schuurmans is involved in the development of a flood forecasting app that draws from modern satellite data and a new generation of flood modelling. The technology is already used in Rotterdam, and Schuurmans announced that a pilot will start in Accra, Ghana in September. The big challenge we face is to ensure the app is accessible to the poorest and most vulnerable members of society and so remains free of charge, she explained.

The heat is on 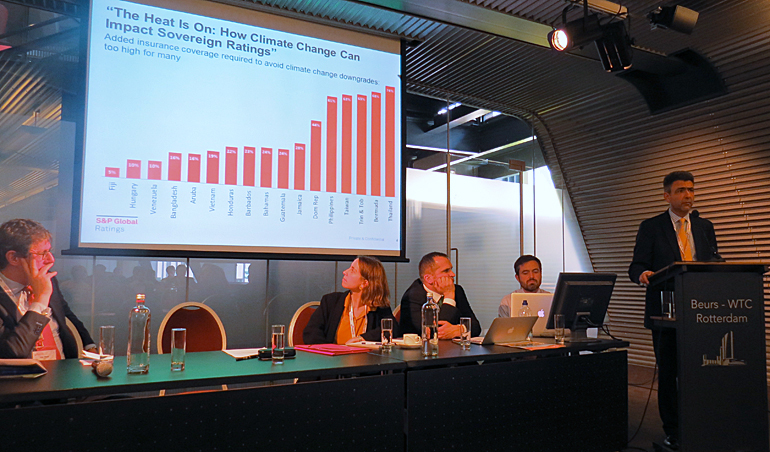 Earlier this year the Chinese fishing industry was down rated when it became clear their quotas had decreased because of the effects of El Nino, told Michael Wilkins if the UK firm S&P global ratings. His firm lowered the rating of a Chinese fishery company that could not repay their loans as revenues had dropped considerably. One of the reasons were the bad catches off the coast of Peru.
The heat is on, said Wilkins (right), referring to the financial down rating of national economies that are reluctant to incorporate the effects of climate change. Companies and governments need to incorporate the financial setbacks from natural catastrophes. Or they must budget the measures that are needed to avert the risks. 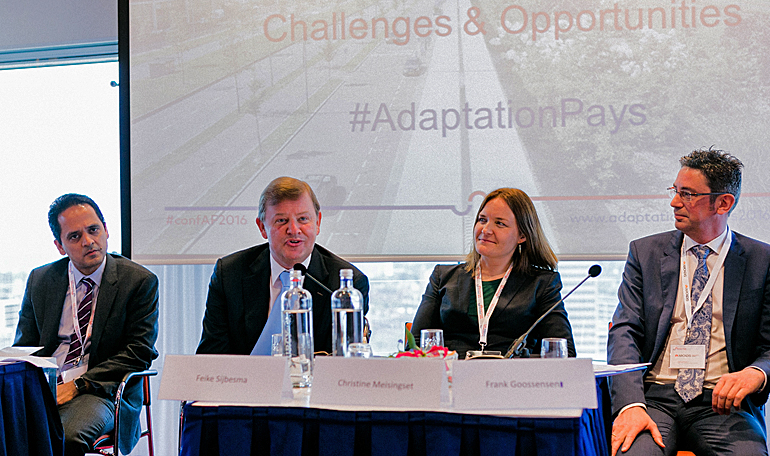 The second day of the conference was programmed to explore the challenges and opportunities for business, starting with a panel debate World business council for sustainable development (WBCSD). The panel concluded that the business case for decarbonizing the global economy, is picking up quickly now. Climate adaptation is lagging behind. One of the reasons given, is the fact the business does not understand climate adaptation. It is better to address business in terms of climate risks, as was suggested. For the development of business models for climate services, it is vital to have guidances on predicting and valuing risks and risk avoidance. 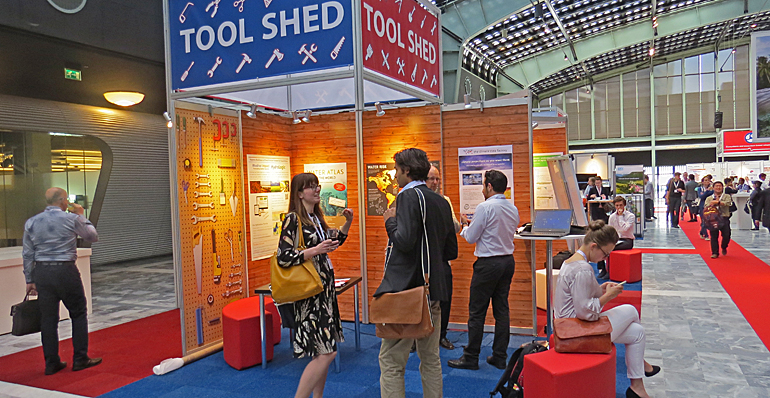 On the exposition floor a special pavilion showed adaptation tools, ranging from web-based knowledge platforms to vulnerability and risk assessment tools. Many of these tools were also presented at the conference sessions, such as the Climate-Adapt platform, the Coastal hazard wheel decision-support system, the Climate data factory to support climate services, the Aquaduct global flood analyzer for understanding flood risks, the Participatory benefit-cost analysis for the appraisal of adaptation measures.

The sky is the limit 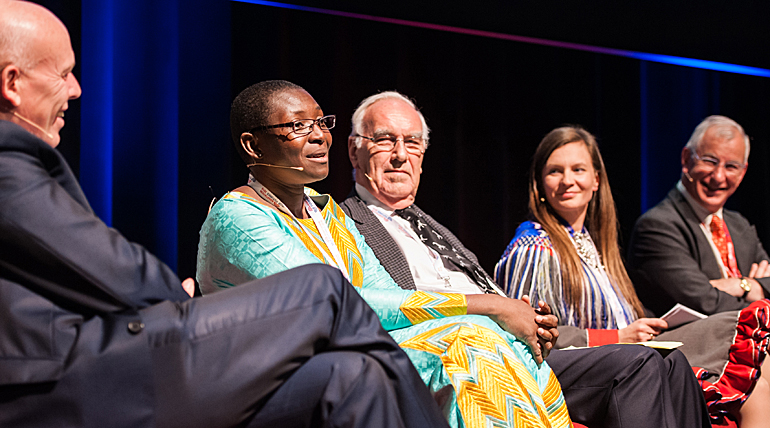 Princess Abze Djigma of Burkina Faso (second left) joined the final plenary session and addressed the need to support the informal sector in Africa. The women and young people that sell their goods along the roads, are the drives of our economy, the princess said. Their conditions are hard and they are in a surviving mode. In her country she set up an experience hub to make it easier for investors to understand these informal markets. "I tell my people to stop complaining and organize ourselves. If we can use the brains of both the developed and developing world, and start programmes to help the people at the bottom-of-the-pyramid, the sky will be the limit", the princess said. 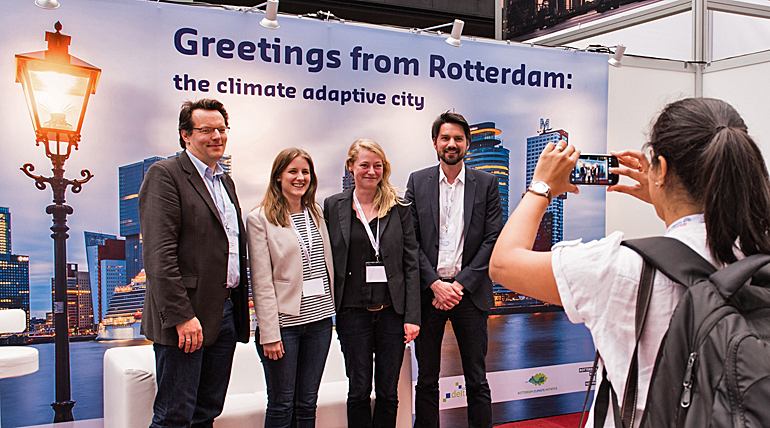 The next international climate change adaptation conference organised by UNEP/Provia will be held in Cape Town, South Africa, in 2018.