Adaptation Futures 2016: A pat on the back and off to COP22 in Morocco 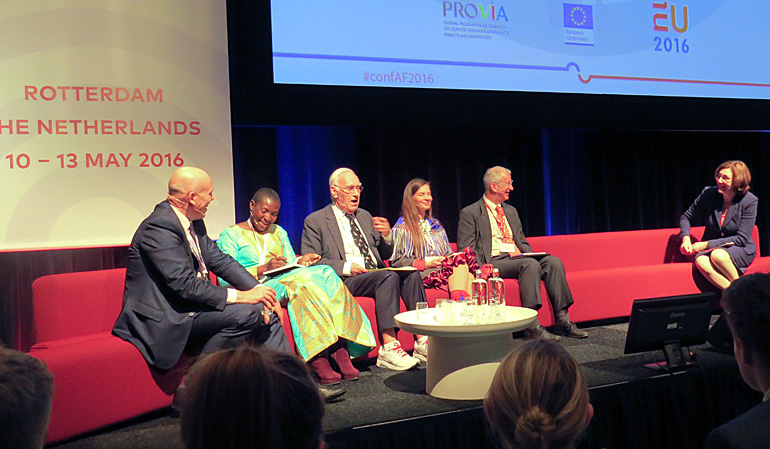 Successful interventions to avoid causalities and damage from natural disasters are hardly visible. It is difficult to establish the effects of climate adaptation strategies and actions. In fact the climate adaptation community has already achieved quite a lot and should give itself a pat on the back, once in a while.

This was one of the takeaways mentioned at the closing session of the Adaptation Futures 2016 conference that took place in Rotterdam, the Netherlands on 12 May.

Coming from the COP21 climate summit in Paris where climate adaptation was fully recognised, next to decarbonisation of the global economy, the climate adaptation community spent three days in Rotterdam to collect new input for the next COP-meeting in Morocco in November.

Over 1,700 scholars, practitioners, policymakers and business people from 107 countries attended this 4th biennial conference of the Global programme of research on climate change vulnerability, impacts and adaptation (PROVIA), and co-hosted by the European Union and the Dutch government. 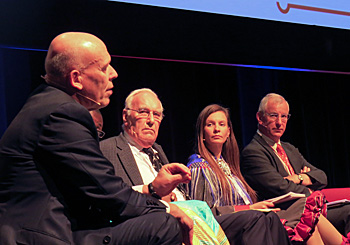 Jos Delbeke (left) lifted a little corner of the new European climate adaptation strategy for 2030. Sitting on the right is WMO-director Christian Blondin

Sharp decrease of causalities
In the closing session Christian Blondin, director World Meteorological Organisation reminded of the achievements by the climate adaptation community. "The last decade shows a sharp decrease of casualties from natural disasters. The investment in better weather forecasting has paid off and allowed to put early warning systems in place so communities are better prepared".

Of course the news was still on the large amount of causalities but the low number compared to 1991 showed the effectiveness of the early warning system put in place by the Bangladesh government.

Blondin noticed that the total loss of economic assets has sharply increased worldwide. So there is still a lot of work to do, he concluded.

Rethink European adaptation strategy
Jos Delbeke, director general for climate action of the European Commission announced a rethinking of the European Union's adaptation strategy. Three pillars are to receive more attention: cities, water and disaster risk reduction. "Our water use is too high, just as in many other places in the world. We have to revisit this because there is simply not enough", he said.

"It will be heroic if we can keep the temperature rise below 1,5 degree", Delbeke continued, "but even then we will face climate change. Therefore we will also look what we can do more in the full cycle of disaster risk reduction, including prevention, emergency response and recovery". 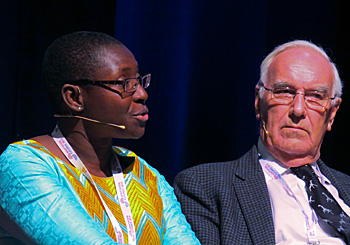 No more pilots
Delbeke announced that the European Union development aid will 'be more coloured by the way we look at climate adaptation'. This announcement provided princess Abze Djigma of Burkina Faso the opportunity to ask the European Union to stop funding pilots in Africa.

"Trust us", she said, "and stop investing in pilots. Use our brains and dare to put us in the centre. Create the challenge and link it to our world, and our values", the princess said.

From incidental, systematic to transitional approach
The final panelist to speak at the closing session was emeritus professor Ian Burton of the University of Toronto. He put in a critical note. He praised the climate adaptation community that the initial incidental approach with a new seed or a changed waterway, has now evolved to a more systematic and even transitional approach. He wondered whether it is time for a next step and put climate adaptation in a global context.

Critical on dominance of economic values
A context that is changing readily, Burton told. "We face a development that the world is not doing so well anymore. Governments, institutional and legal frameworks are weak in relation to the magnitude of the issues. Economic values have taken a big dominance over social and environmental values." 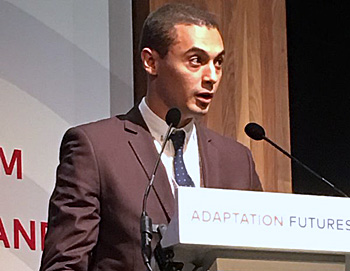 Ayman Bel Hasan Cherkaoui invited the climate adapation community to come to the next climate summit, the COP22 in Marrakech, Morocco.

Burton advised the climate adaptation community to be more critical on the current global development. "Market solutions cannot solve everything. Think more radical", ending his critical note. "In certain areas global development is creating new risks, and perhaps at a faster rate than we are actual reducing".

The 5th biennial conference of the Global programme of research on climate change vulnerability, impacts and adaptation (PROVIA) was announced to take place in Cape Town, South Africa, in 2018.

Ayman Bel Hasan Cherkaoui, advisor to the environment minister of Morocco, finally invited all participants to COP22 in Marrakech in November 2016.

Video recording of the closing session on 12 May.