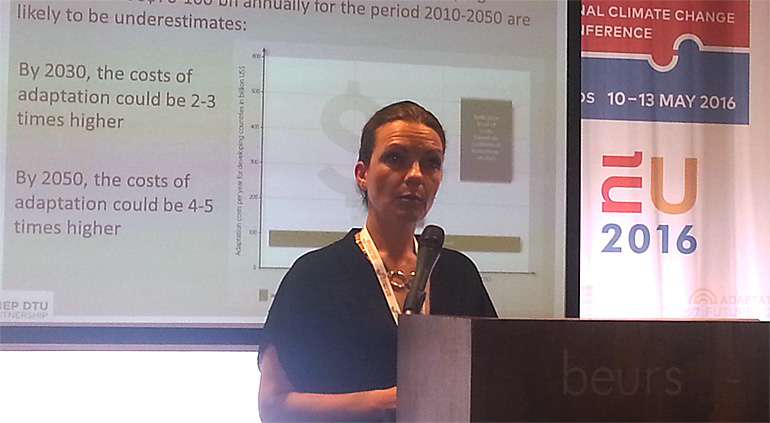 The best-estimated cost of adapting to climate change in developing countries could rise to between 280 and 500 billion US dollar per year by 2050, a figure that is four to five times greater than previous estimates, according to the new Adaptation Finance Gap report by United Nations environment programme (UNEP).

The new report with the latest figures was released at the Adaptation Futures 2016 conference in Rotterdam, the Netherlands, on 11 May.

Focusing on developing countries, where adaptation capacity is often the lowest and needs the highest, the 2016 Adaptation Gap Report examines the period up to 2050. 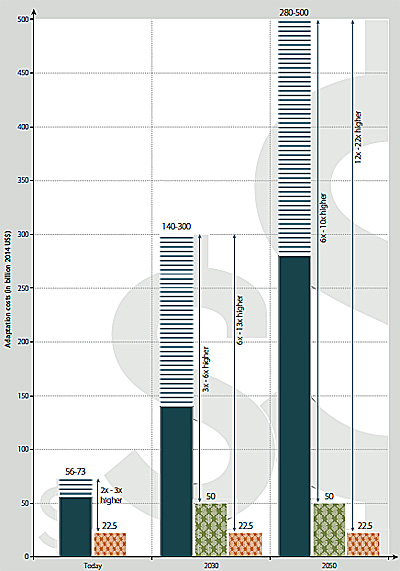 Illustration of the 'gap' today, by 2030 and by 2050 between adaptation costs (low range in dark blue and upper range in dark blue stripped) compared to the public financing by developed countries (in red)  and the pledged donation to the Adaptation Fund (in green).

While total bilateral and multilateral funding for climate change adaptation in developing countries has risen substantially in the five years leading up to 2014, reaching 22.5 billion US dollar, there will be a significant funding gap by 2050 unless new and additional finance for adaptation is made available.

Negotiations on adaptation fund
The publication by UNEP of this new report relates strongly to the Paris climate agreement that calls for more information on adaptation needs, costs and finance.

At the climate summit in Kopenhagen in 2009 it was agreed to establish a climate adaptation fund of 100 billion US dollar to be donated by the developed countries.

Since its start in 2010, the Adaptation Fund has mainly relied on donations by European governments and has been able to commit 338 million US dollar to adaptation projects in 61 countries.

Two previous studies
The negotiations on the fund has relied on two main studies. In 2010 the World Bank released a study that indicated the cost between 2010 and 2050 of adapting to an approximately 2oC warmer world by 2050 is in the range of 75 billion to 100 billion US dollar a year.

In 2014 UNEP published its first Adaptation Gap report warning that the 100 billion dollar costs to be a significant under estimate.

With the latest financial data available the UNEP now estimates in this second Adaptation Gap report that the costs for developing countries to counter the effects of global warming will be about five times higher and amount to 500 billion US dollar by 2050.

According to the new Adaptation Gap report presented in Rotterdam, the total bilateral and multilateral finance for climate change adaptation is steadily increasing, reaching 25 billion US dollar in 2014, of which 22.5 billion targeted to developing countries.

Best assessment possible
"The real climate adaptation costs should be the additional", said Anne Olhoff of UNEP DTU partnership when she presented the report in Rotterdam (on top photo). "Developing countries calculate their costs all in. For donors and investors it is important to separate the costs specially made for actions related to counter the effects of climate change."

Barney Dickson, director of programmes at UNEP World Conservation Monitoring Centre, commented that the new report is the best assessment possible at the moment. The definition of climate adaptation is differently used and the costs vary strongly depending on the methodology used and the assumptions made. "It remains difficult to track what has been spent intentionally on climate adaptation. Especially when it concerns remittances made following a disaster."

Dickson admits that little is known about these often very local financial flows in relation to climate change. 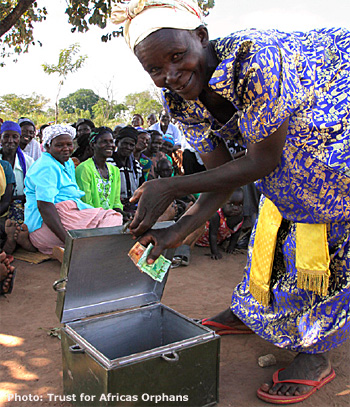 The United Nations Framework Convention on Climate Change (UNFCCC) has called on developed countries to provide 100 billion US dollar annually by 2020 to help developing countries mitigate climate change, and adapt to its impacts, such as drought, rising sea levels and floods.

Although the Paris climate agreement calls upon a commitment by the parties to such a fund, no agreement was reached on the type of funding that needs to be mobilised to fill the gap. According to UNEP this hampers the efforts to monitor progress towards meeting the goal.

This news item is based on the press release published on the website of UNEP.

Video recording of the session on the adaptation finance gap on 11 May.