Syria and Yemen are usually the first countries mentioned in relation to war over water. A new study by research institute Deltares ranking countries on their potential of water scarcity-related conflicts, confirms this. Both countries colour very red on the global map of the world’s hotspots.

Surprisingly the study also shows that even countries as the United States and the Netherlands have a certain conflict-sensitivity when their fresh water resources get depleted.

Researcher Karin Meijer of Deltares presented the results of the study on the first day of the Adaptation Futures 2016 conference in Rotterdam, the Netherlands on 10 May.

Meijer explained the study is a first attempt to identify the hotspots. “We need a much clearer understanding of the interactions between climate change, water scarcity, food production, inequality and social unrest, to better identify the countries worldwide where hotspots of water scarcity-related conflicts may emerge in the future. Only then will we be able to devise measures to reduce those risks”, she remarked. 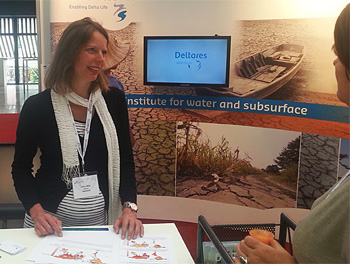 Real causal relationship
Meijer said that the current information is not adequate to identify those hotspots with a greater degree of certainty. Existing studies describe only specific situations or show a statistical analyses.

Meijer “A statistical relationship is not enough to design effective measures. The causal relationship must be clear. For example, there is no consensus about the role of climate change in the conflict in Syria and Yemen. There is literature about both Syria and Yemen that states that water scarcity caused by climate change has contributed to the conflict. Other literature blames the scarcity on increased water demand or inefficient water policy.”

The research institute’s approach will, in addition to its existing close collaboration with the World Resources Institute (WRI), be combining its specialist water knowledge with the food models of Wageningen University (WUR) and the socio-economic and governance knowledge of the Clingendael institute of international relations. 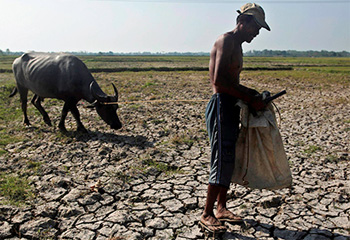 Hunger and despair
Dr. Louise van Schaik, senior research fellow at the Clingendael Institute explained how water scarcity potential leads to social unrest and finally to conflicts. “Food shortages due to drought make people move away from barren land because they have lost their income. They go to the cities, which are often overcrowded already.”

According to Van Schaik it is mainly the poor who are extremely vulnerable to rising food prices. “Driven by hunger and despair, they can be more receptive to revolutionary ideas that may, if no steps are taken, result in social instability and in violent conflicts such as food riots. Our contribution is that we can link the literature about potential conflicts and the associated political debate with the knowledge about water and the data at Deltares.”

Both Meijer and Van Schaik underlined the importance to continu the study and apply water models to food production, inequality and social developments. This should improve the ability to identify countries where there is a risk of conflicts in the future, and allow authorities to take early action.

Clingendael, Institute of international relations
The Hague, the Netherlands
+31 70 324 53 84
www.clingendael.nl