Adaptation Futures 2016: Where is the business case for climate adaptation? 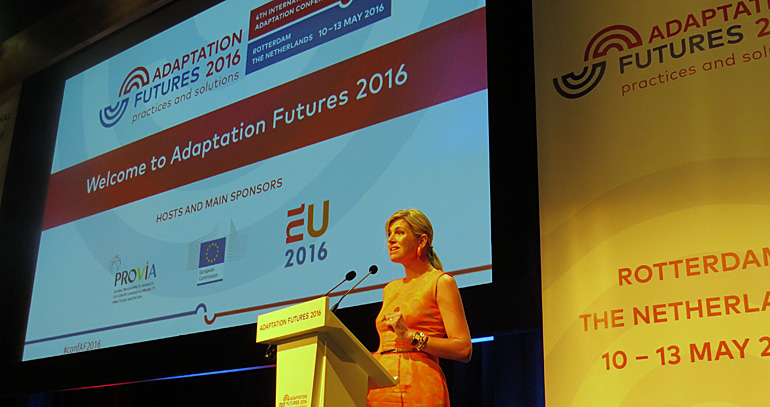 Reacting to a changing climate makes economically sense as investments now can save on future damage repairs. But where is the business case? How can one define an adaptation project that minimizes the effects of extreme weather events and, at the same time, can have a return on investment? This question kept the participants of the Adaptation Futures 2016 conference occupied on their second day.

Climate adaptation is a never ending process that in the end can only be successful if it is based on a long term strategy. However already today the effects of climate change are felt directly. Natural disasters hit more extreme and with a higher frequency. So action is imminent. What better than to ask the business society, holding technologies and able to introduce innovative measures much more quicker than governments.

This question dominated the plenary discussion that was initiated with a keynote by Dutch Queen Máxima in her role as UN special advocate for inclusive finance for development. 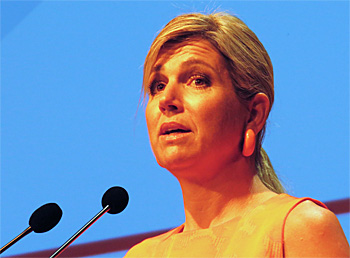 Dutch queen Máxima called for opening up financial services to the poor enabling them to recover more quickly from natural disasters.

Opening up financial services
In her keynote Queen Máxima (on top photo) focused on the special circumstances after a disaster. “When a flood or drought hits a region, people’s savings are whipped out and become void of all hope for a better future. Financial services can reduce this vulnerability and increase their ability to escape poverty. Saving accounts can be funded at better times to be used at harder times. Insurances spread out the risk more evenly and reduce the financial hardship caused by extreme events. It helps to rebuild assets and help handles large expenses such a medical bills.”

Key role for telecom sector
According to the queen the telecom sector holds the key and she mentioned the example of a weather based insurance. “The introduction of new seeds can be a worrisome experience. Very exciting is the development of new financial products such as weather based insurance schemes that protect small farmer households to weather related crop losses. When weather stations detect drought, farmers is made a payment directly via their mobile phone.”

The effects are clear, said queen Máxima: “Insured farmers are able to invest 20 percent more in their farmers and earn 60 percent more income, then their uninsured neighbours. The same goes for small entreprises that need financial products tailored to their needs. A simple loan or insurance pay out can help them to prepare them to cope with extreme weather events.” 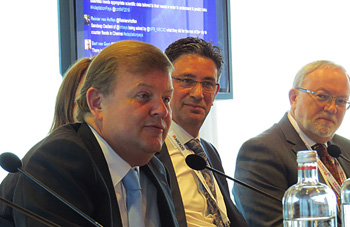 Urgency to decarbonise global economy
In the following plenary debate CEO of the Dutch chemical multinational Royal DSM, Feike Sijbesma clearly felt uneasy as the business representative that should bring the solution to climate adaptation. “It feels like a request to the business sector to come up with a model to make a business case out of the misery of the vulnerable.”

Sijbesma emphasized the importance to meet the mitigation goals first and quickly start to decarbonise the global economy. “But it would be immoral to close our eyes for the countries that suffer from the first effects of climate change. In the south of Bangladesh 50 million people cannot live there anymore. Even today. Or take the horn of Africa where 120 million people cannot live there anymore. We need to invest so that those people can remain living there.”

To illustrate the need for such a fund, Sijbesma mentioned the awkward situation Ethiopian farmers find themselves in today. “If they continue to use their land as they do now, the land will degrade faster. We can train them to use the land differently but in the first year the yield will be less. So farmers resist tremendously.”

The perspective of a higher yield in five years, does not overcome their current financial sorrows. “Therefore it is important”, Sijbesma continued, “that programmes as by the UN food organisation, can step in and help to overcome those first difficult years.” 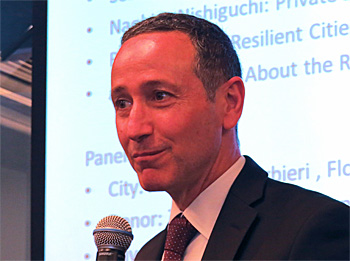 Vulnerability linked to poverty
Robert Glasser, special representative of the UN secretary-general for disaster risk reduction, called up on business society to step in quickly. “If all emissions of greenhouse gasses would stopped right now, the world will still warm up because of the inertia of the climate system. The effects of the global warming shows everywhere and need immediate action.”

Vulnerability is fundamentally linked to poverty, Glasser said. “History has shown that we cannot lift poverty without economic growth. Vulnerable people do not have access to government to express their needs and desires. In disasters we see so much evidence of this. The only way to respond to climate change is to mobilize the market. We have to make changes so quickly that it can only be achieved by the dynamics of the market. Otherwise it will not change quick enough.”

Food production in West Africa
Laurent Sédogo, director of the West African science service center on climate change and adapted land use, brought in the pressing circumstances in West Africa. Climate change makes the burden of the African development agenda heavier, he said. “Who is going to feed the 2 billion people who will be living in West Africa by 2050. Already today it is difficult for farmers to survive and keep the food production going. Higher temperatures make it difficult for them to grow traditional crops. Additionally we have extreme events that destroy all infrastructure.”

Sédogo praised the German government to support the creation of regional climate service centres in Africa for adaptive land use. “These centres can provide the scientific evidence on the impact of climate change and tell the farmers and decision makers this is now how you need to behave”. 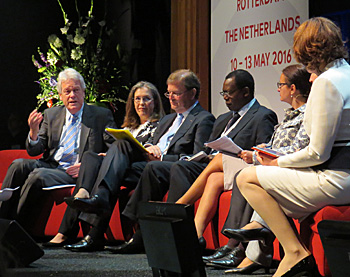 Dutch delta commioner Wim Kuijken called upon the insurance sector to step in.

Bring in insurance sector
Wim Kuijken, Dutch delta commissioner and responsible for the coordination of the long term water management strategy in the Netherlands, challenged different interest groups to step in.

The issue is not to break down silo's but to bring parties together and make them contribute to a higher goal, he contributed to the debate.

“To realise our long term water management strategy, we try to make bankable projects. We define objectives that make business to step in and invest. For instance by designing levees as an energy plant, widening our rivers by the creation of new recreational assets, or enforcing our dunes by construction of a car park underneath”.

Kuijken made a special plea for the insurance sector to step in. “They have a great interest in the reduction of future damages. We need to unlock their interest”.

Plenary presentation by Her Majesty Queen Máxima of the Netherlands, UN Special advocate for inclusive finance for development, at the Adaptation Futures conference, in Rotterdam, the Netherlands on 11 May.

Video recording of the following plenary debate on the issue of financing climate adaptation.