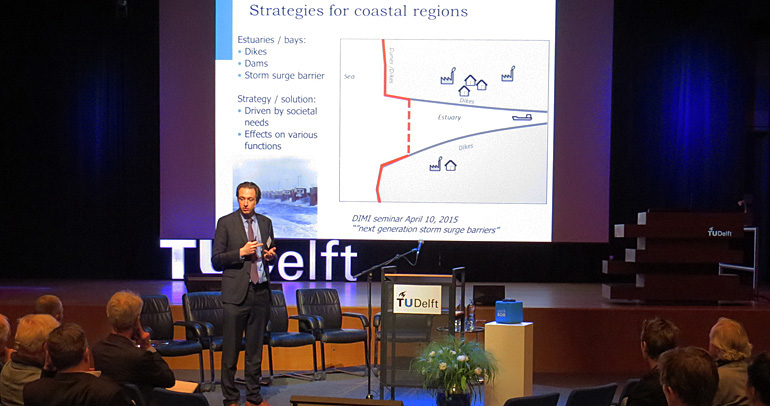 Uncertainty over climate change and social-economic developments have a big influence on new large storm surge barriers for the protection of ports, such as Rotterdam (NL) and Houston (USA).

The impact of these future uncertainties emerged at the congress 'Deltas & Ports of the future' organized by the Deltas, Infrastructures & mobility initiative (DIMI) of Delft University of technology, the Netherlands, on 28 January.

Dutch surge barriers are world famous but the negative effects of these large structures made the Dutch water authorities look for new solutions that can adapt to the progress of climate change and social-economic development more easily. 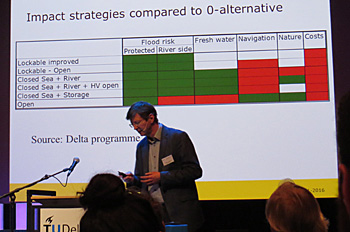 Comparision of different impacts (negative in red and positive in green) for a closed or open access to the port of Rotterdam, shown by Harold van Waveren of Dutch national water authority Rijkswaterstaat.

Based on the current climate scenarios this mayor Dutch flood barrier needs to be adapted to the expected sea level rise, soil subsidence and river discharge by 2070.

New insights in climate adaptation triggered Dutch water experts on alternative ideas for the navigational channel that links the port of Rotterdam to the North Sea.

The port of Houston is unprotected and after Hurricane Ike hit the Galveston-Houston area in 2008 the question raised whether or not to construct a storm surge barrier to be able to close off the Houston Ship Channel. 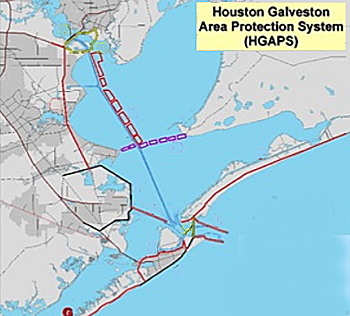 One of the potential flood mitigiation schemes being studied for the Houston-Galveston bay area (USA).

Adaptive coastal management
Both the ports of Rotterdam and Houston are situated in a densely-urbanised and industrialised delta region. Flood protection is a key issue, but interventions may conflict with economic welfare and liveability.

Especially given the current uncertainties over climate change, economic growth and spatial planning.

At the congress it was highlighted that climate scenarios make projections up to a century ahead, where as social-economic scenarios are limited to 20 to 30 years.

This makes it very difficult to design and engineer a large flood barrier with a long life span. Especially when its design has to meet multi criteria, such as port expansion, city development, nature conservation and recreation. 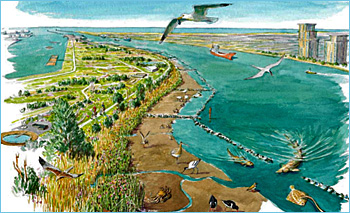 Impression of tidal parks along the access waterway to the port of Rotterdam (NL).

Nature as an ally
This explains the growing interest in more nature-based interventions, such as restoration of wetlands or creation of reefs that can reduce the wave energy, trap sediment and grow with sea level rise.

The Dutch branche of the World Wide Fund for Nature showed plans to create tidal parks on the banks of the river mouth from Rotterdam to the North Sea.

The nature conservation groups is developing these plans together with the port of Rotterdam that has a clear interest to keep the river mouth open for shipping.

Recording of the congress Deltas & Ports of the future can be seen at the Collegerama TU Delft.
(morning programme)