Using the very detailed and faster calculating 3Di modelling technology, recently developed by a consortium of Deltares, Delft University of Technology and Nelen & Schuurmans, Dutch hydrologists shed new light on one of USA’s most intriguing stories: the escape from the heavily guarded prison island of Alcatraz just north of San Francisco by three prisoners on 12 June 1962.

The annual Fall Meeting of the American Geophysical Union (AGU) is the world's largest conference in the field of earth sciences and is attended annually by more than 27,000 scientists, policymakers, teachers and students. 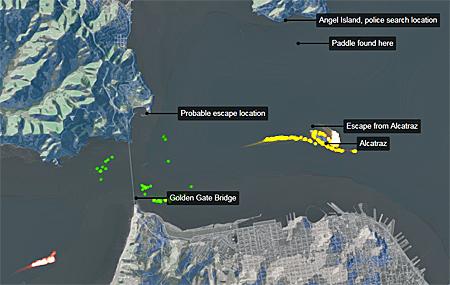 'Boats' that left Alcatraz at 23.00 (red) floated with the outgoing tide into the ocean. 'Boat's that left at 0.00 (green) reached the Golden Gate but dispersed when the tide changed. 'Boats' that left 1.00 (yellow) were pushed back to the island almost immediately.

Simulation of currents in San Francisco Bay
In the night of June 12, 1962 three inmates used a raft made of raincoats to escaped the ultimate maximum security prison island Alcatraz in San Francisco, United States. History is unclear about what happened to the escapees. At what time did they step into the water, did they survive, if so, where did they reach land?

In their presentation at the AGU Fall Meeting, the Dutch hydrologists demonstrate a visualization of a high-resolution hydrodynamic simulation of the San Francisco Bay, combined with historical tidal records.

By reconstructing the hydrodynamic conditions of the incoming and outgoing tide of that particular night, and by using a particle based simulation of the escape, they show possible scenarios.

The interactive model is visualized using both a 3D photorealistic and web based visualization.

The inter-model variability is tested by comparing the results with the DFlow Flexible Mesh (DFlowFM) San Francisco Bay model.

Interactivity is implemented by converting the models from static programs to interactive libraries, adhering to the Basic Model Interface (BMI). Interactive models are more suitable for answering exploratory research questions such as this reconstruction effort. 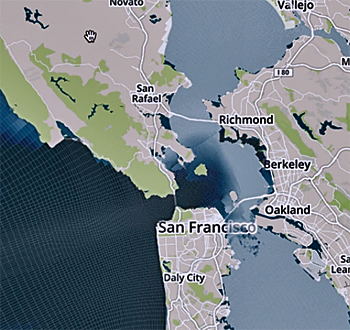 For that purpose, he modelled the bay area in considerable detail using 3Di, state-of-the-art hydraulic software.

Situated in the San Francisco Bay is the Alcatraz island with its famous prison. Realising that the hydraulic model could be used to shed new light at the Great Escape from Alcatraz, the tide information for that night was quick entered.

By releasing 50 'boats' every 30 minutes between and by adding a paddling effect the model shows that the prisoners must have left the island between 23.00 and midnight

About 3Di
3Di, a new hydraulic simulation model visualising the impact of intense rain fall and potential flood flows. 3Di is 100 times more detailed and 100 times faster than the existing models. The precise calculations not only make it clear where the vulnerable areas are, but also shows the cost-effectiveness of potential measures. This could save tens of millions by tailoring upgrade measures.

3Di software is now being used by Dutch water authorities and municipalities such as Amsterdam, Rotterdam and the Hague.