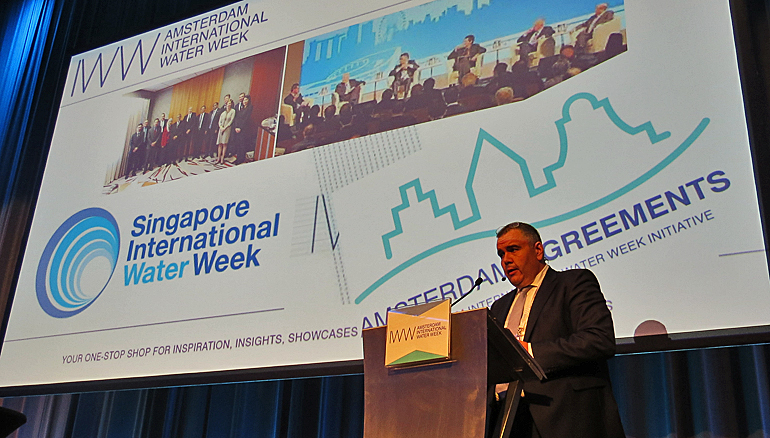 Stop the talk, do the walk. At every conference the young water professionals urge the governments and global water community to act. Their plea seems to have affect. At the Amsterdam International Water Week nine coalitions presented their ‘breakthroughs’ and signed the Amsterdam Agreement that promised to report back on their progress at the next AIWW Conference in 2019.

The AIWW Conference took place from 31 October until 1 November as part of the Amsterdam International Water Week. The conference was attended by 1,200 delegates. 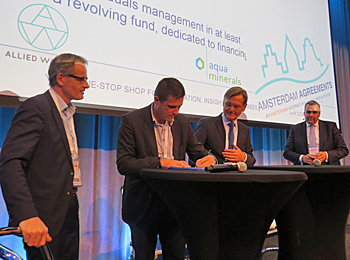 A coalition of three Dutch partners signed an Amsterdam Agreement to upscale the recovery and reuse of materials from waste water.

Finding a new concept
The idea of the Amsterdam Agreements is that coalitions are essential to solve the complex water issues of the future.

The conference had a focus on the world population reaching the 9 billion mark in 2050 and the subsequent sharp rise of the demand for fresh water. Not only for drinking water, but also for industry to make more products, for power station to deliver more electricity and agriculture to grow more crops.

Sharing successes and failures
The first nine Amsterdam Agreements that have been signed on 31 October show a wide variety of solutions and coalitions. It includes public, private and financial partners.

These partners are considered to be able to address best the future water challenge in a joint effort. The coalitions that presented themselves in Amsterdam are expected to show their progress to the world so everybody can learn from their experiences. 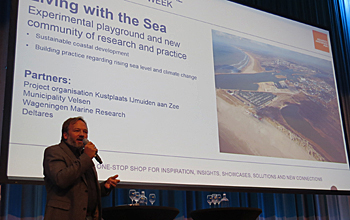 A coalition of also three Dutch partners will provide an experimental playground for new building practises on the coast.

Exploit opportunities
Dutch Prime Minister Mark Rutte underpinned the importance of the initiative. ‘Working together in the field of water is more crucial than ever. That is why we are here to exploit the opportunities water presents, but also to tackle the problems it creates.’

Discover roadblocks
Lennart Silvis, Chairman of the Managing Board AIWW and Managing Director of the Netherlands Water Partnership (NWP) highlighted the urge of organisers to give the conference more meaning. ‘The success of this conference is that we did not organise a traditional call for papers. We deliberately want to come up with concrete output and new partnerships, such as the Amsterdam Agreements.’ 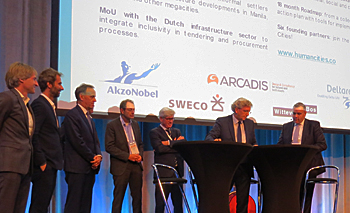 The already existing Human Cities coalition – founded by Dutch multinational Akzo-Nobel - agreed to share their experiences on their contribution to th UN New urban agenda by improving settlements in megacities such as Jakarta and Manilla.

The challenging part of the agreements is their follow up after the conference. ‘Part of the agreement is to keep us informed about the progress, the challenges, road blocks and successes, and increase the transparency which is required to make the next step in the global water world’, added Silvis.

Working towards an international movement
During this week the AIWW management board and a delegation from Singapore agreed on an intensive cooperation between AIWW and Singapore International Water Week.

The organisers of both conferences will intensify the sharing of experiences and contacts, as well as sharing the experiences and giving updates on the Amsterdam Agreements next year at the conference in Singapore.

This way the AIWW is intended to gradually transform from an event into an international movement.

This news item is based on the press release published on the website of AIWW.