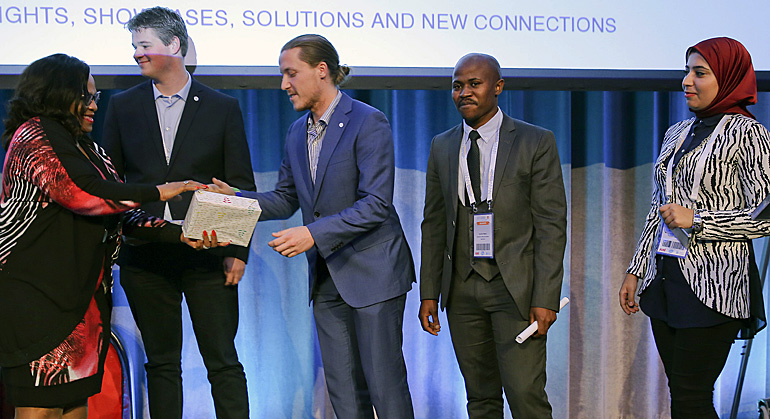 A fish passage in a polder that only opens at a certain level of rainfall: This new fish migration system won the Wetskills challenge on 2 November. The winning team received their award from Nomvula Mokonyane, the South African Minister for Water and Sanitation during the closing session of the Amsterdam International Water Week Conference.

It was the fourth time the challenge for young water professionals took place in the Netherlands and was again hosted at the Amsterdam International Water Week. 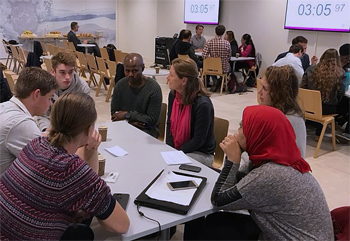 Six teams were challenged to come up with a solution for a real case.

Mixed teams
For two weeks, 23 participants from around the world worked in mixed teams on cases of governments, companies, knowledge institutes and water authorities from home and abroad. Their goal: finding innovative solutions for current water-related challenges.

The participating students and young professionals came from all over the world, such as Oman, Egypt, India, Kyrgyzstan, Honduras, Israel, South Africa, and Indonesia.

They were guided by water professionals from the Netherlands. 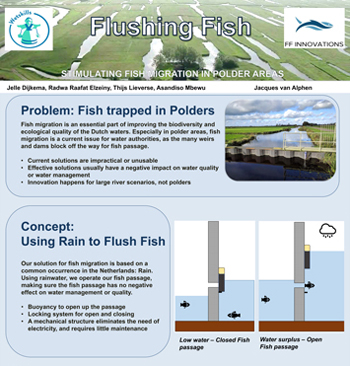 Solution of a fish passge that opens following a rainfall.

Thijs Lieverse commented on their solution: ‘Dutch regional water authority Waternet uses fish passages in their polders with a permanent opening. The problem is that you are continuously losing water and you have to pump back water to maintain the required water level.’

Rain as a solution
‘Our idea was to develop an event triggered system’, Lieverse continued, ‘so that only under certain conditions there is an opening for the fish to migrate. And what is a typical recurring event in Holland? Rain!’

The team designed a system for rainfall to raise the water level in the polder to a certain level. At some point, the system gets the signal ‘full’ and the passage is opened for a few days.

Next ‘Olympic’ edition
The next Wetskills challenge will take place in South Korea, early February, having the finals and awarding in the framework of the Olympic Winter Games. Bachelor, Master, PhD students and recent graduates can still apply for the ‘Olympic’ edition.

This news item was originally published on the website of Wetskills.
(top photo: Rob Kamminga)

Impression of Wetskills-The Netherlands 2017 in Amsterdam.