A second Sarphati award was handed out to Dr. Kamal Kar for his lifetime achievement to give poor people access to sanitation.

The opening ceremony took place on 3 November and started the 25th edition of the Aquatech Amsterdam trade exhibition and a two-day international conference on resilient cities and the circular economy. 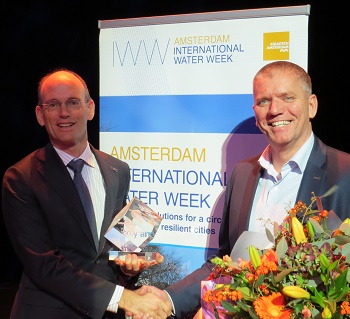 Salttech won the competition with its DyVaR desalination technology to treat highly saline water from the oil and gas industry by using a combination of evaporation and vapor recovery.

The treatment recovers almost all of the water making it available for reuse. The salt is concentrated in an easily handled dry concentration.

The first full scale installation is operational in Texas, USA for a year now. According to director Gerard Schouten (on top photo) the installation is performing well and processes waste water that was considered to be untreatable. 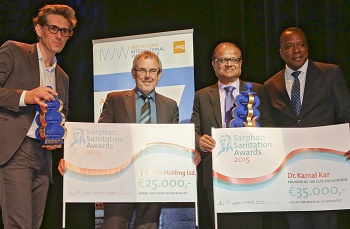 Feces recovery in Ghana
The Sarphati award for the most promising sanitation business case by a young entrepreneur went this year to Aart van den Beukel of Safi Sana. His company processes feces in Ghana.

Van den Beukel was selected by the jury from four other candidates as his company Safi Sana is considered as an outstanding example of how the philosophy of Dr Sarphati is put into practice in developing countries.

Safi Sana creates value from human waste for enriched soils and vegetable production, and renewable energy from biogas. Safi Sana is set up as a scalable model, designed as a blueprint for replication.

Ending open defecation
The second Sarphati award was presented to Dr. Kamal Kar for his lifetime achievement in the field of sanitation.

On the occasion of the hand out mayor of Amsterdam Eberhard van der Laan praised Kar as founder of the Community led total sanitation (CLTS) foundation that has been successful to ban out open defecation in thousands of communities worldwide.

The jury choose unanimously for Kar as his new approach left behind the unsuccessful practice of building toilets with subsidies and, instead, started to building knowledge and creating awareness on the negative health effects of open defecation.
Kar accepted a cheque of 35.000 euro.

More information
www.internationalwaterweek.com
www.aquatechtrade.com/amsterdamen
use the keyword - AIWW - and download the App