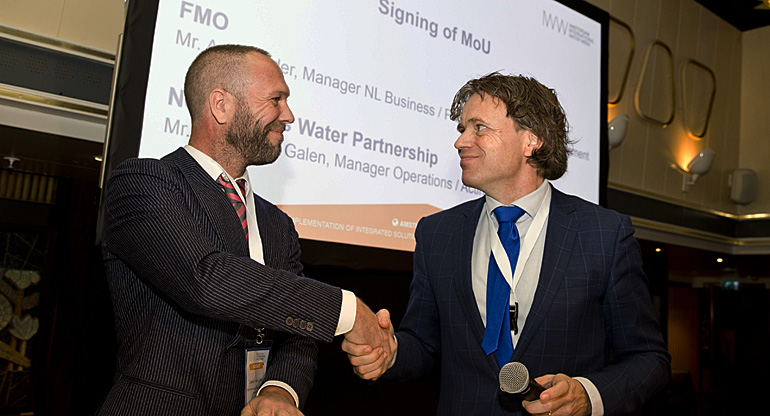 FMO development bank and Netherlands Water Partnership (NWP) signed an additional Memorandum of Understanding to finance more water projects than originally intended. Furthermore, utility Waternet Amsterdam signed an Memorandum of understanding with water utility SIAAP of Paris for the structural exchange of knowledge and experiences. Both MoUs were signed at the AIWW Summit in Rotterdam, the Netherlands on 15 November. The documents are called ‘Amsterdam Agreeements’ and refer to the nine agreements signed at the Amsterdam International Water Week in 2017.

The Amsterdam Agreements are characterised by unconventional collaborations that contribute to the Sustainable Development Goal 6 on water. The collaborations are set up as show cases and, if proven successful, to be multiplied worldwide. 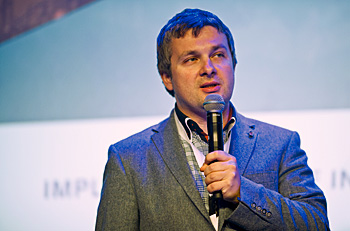 Director of the Polish 44 cities climate adaptation project told that he seeks support for the implementation of all the adaptation measures the cities have come up with. He hinted the idea to collaborate in an Amsterdam Agreement.

Bankable projects
The collaboration between FMO development bank and network organisation NWP aims to identify bankable water projects for the Dutch water sector interrnationally. By encouraging greater coordination among ministries, the water sector and financial institutions, more money can be raised for these projects.

At the AIWW in 2017 FMO and NWP signed their first agreement and meanwhile 27 projects have been identified and are in the pipeline to be financed.

Financial gap
According to NWP Acting Director Ewout van Galen the first results show that this kind of collaboration can contribute to close the financial gap. The total global investment requirement for water infrastructure is estimated to be 7,500 billion dollar until 2030. Only 6,300 billion dollar is projected to be available, leaving a financing gap of 1,200 billion dollar.

On the occasion of the signing of the agreement at the AIWW Summit Van Gaalen said: ‘The development of new business models including return-on-investments can make an important contribution to closing this gap.’

He specially mentioned the sanitation sector. ‘Nobody likes to pay for getting rid of his poop, so the business model must be in creating sellable end products such as biogas, compost and fertilizer’. 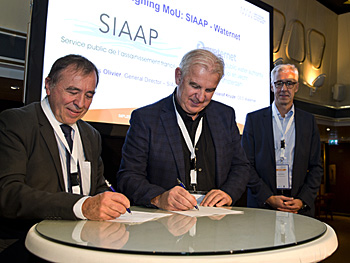 Collaboration between Amsterdam-Paris-Berlin
The other Amsterdam Agreement signed was between the water utilities of Amsterdam (Waternet) and Paris (SIAAP). Both utilities have identified areas on which they want to collaborate on development of new knowledge.

According to SIAAP managing director Jacques Olivier his company has already MoUs with water utilities in developing countries on sharing technical assistance and now SIAAP wants to expand this to major cities in developed countries.

‘We want to start small with Berlin and Amsterdam and see the results first’, Olvier said on the occasion.

Present at the occasion was also Jörg Simon, director of Berliner Wasserbetriebe. His utility signed an Amsterdam Agreement at the AIWW in 2017. Simon said to look forward to Paris joining the collaboration.

Reporting on progress
One of the specific items of the Amsterdam Agreement is that the parties report back to the AIWW Conference Community on their progress and lessons-learned.

At the AIWW Summit a short update on all nine Amsterdam Agreements was given:
● Human Cities Coalition, involving Arcadis, Witteveen+Bos, Fugro, Sweco, Deltares and AkzoNobel on an action agenda for inclusive urban development with the inclusion of social and human components in procurement design.
● Blue Deal, involving all 21 Dutch regional water authorities and two Dutch ministries on the development and implementation of 40 water basin plans around the world, providing safe water for 20 million people.
● Water in the circular economy, involving KWR and Dutch water supply companies to jointly work on the transition to a circular water sector.
● Living with the sea, involving Dutch coastal cities IJmuiden and Velsen and research institutes Wageningen Marine Research and Deltares, on showcasing new coastal defence scheme in a field lab situation.
● Upscale water resource recovery, involving Allied Waters, AquaMinerals and KWR on the cycling up of waste streams from water treatment into sellable products.

All parties will again report on their progress at the next international AIWW Conference that takes place in Amsterdam in November 2019.