In addition to testing the water quality on fluoride, the Akvo's Caddisfly app will soon be available also for detecting the contamination with arsenic and coliform.

A special designed testing chamber that can be attached to a smart phone, is under development for these two new parameters and the first pilots will start soon.

The Akvo Caddisfly app allows everybody with a smart phone that is equipped with such a testing chamber, to test the water quality on these parameters. 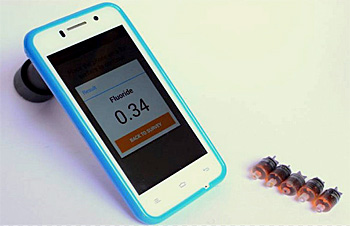 The required hardware to detect fluoride in water: a smart photo, a testing chamber (on the back of the phone) and reagents.

Analysing the water colour
The first step is take a water sample in the testing chamber on the smart phone and add a specific reagent. Then the phone’s camera takes a picture of the water.

The app analyses the photo and detects the colour of the water and translates this into the actual concentration of the contaminant in the water sample.

The Akvo Caddisfly was first introduced in 2015 for the detection of fluoride in water. The technology is supplied in a drinking water testing kit. Everybody with a smart phone can use this kit anywhere.

Additionally Akvo also developed software for the automatic transfer of the measuring data to an open source database where all the measurements are collected and visualized in a map showing the water quality of all water sources in a certain area. 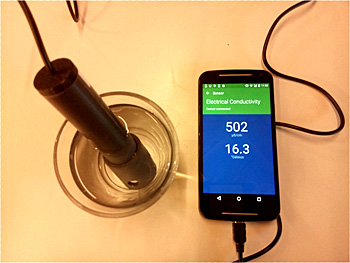 Next to colormetric technology, Akvo is testing the use of electrical conductivity on a smart phone to meassure salinity.

Additional parameters
Since the introduction, the testing on fluoride has been piloted in India, Kenya, Burkina Faso, Ethiopia and Tanzania. Large scale validation has proven this colorimetric technology to be reliable.

By mid 2016 Akvo expects to have a high fidelity prototype which can be manufactured and distributed in large volumes.

At the moment, Akvo is developing additional kinds of water quality tests for the Caddisfly app.

The development of an app to detect the contamination with arsenic and coliform is well advanced and the piloting is expected to start soon.

Additionally Akvo reports the prototyping colorimetric testing for chlorine and turbidity. In Mali (on top photo), Ethiopia, Kenya and Tanzania pilots are conducted on parameters such as iron, pH, nitrate/nitrite and phosphate.

The higher the concentration of dissolved salts in water, the better it conducts electricity, which is an important indicator of water salinity. This includes not only what we know as ‘kitchen salt’ but also elements like sodium, calcium, potassiu.

After determining the salinity of the water, further tests, using a test strip for example, can be conducted to detect the type of salt.

This news item is based on an article that was originally published on the website of Akvo.
(photos by Josje Spierings, Akvo)