On 12 May 2015 the Dutch government revealed its master plan for a complete reinforcement of the 32 km long closure dam the Afsluitdijk, the Netherlands. The reinforcement is necessary as the seaside slope of the 80 years old closure dam is no longer strong enough to meet flood safety standards.

The project is expected to start in 2017 and has been budgeted for 850 million euro.

Basic requirements
The master plan Nieuwe Afsluitdijk does not specify construction details of the new dam. It only gives the basic requirements and shows drawings of the envisioned new look (see impression above). In a later phase, the final design will be determined by the government in close consultation with the contractor.

This creates space for innovation and cost-effective solutions. 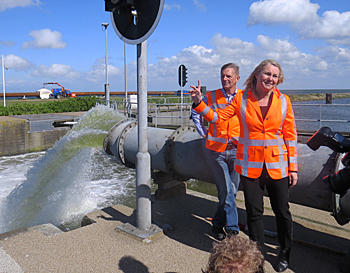 This implies the strengthened dam must be able to withstand the waves of an extreme storm that can - theoretically - occur only once in 10.000 years. The waves are allowed to overtop the dams to the extend of 10 liter per second per meter.

Based on an expected sea level rise of 31 cm, the reinforced dam will meet the new flood safety standards until at least 2050.

New construction to break roll-up waves
Limiting the amount of water overflowing the dam, is possible by roughening the cladding on the outer slope. For instance by using energy absorbing concrete blocks or a special designed open structure that can be filled with clay, sand and shells.

Different types of cladding are currently being investigated. 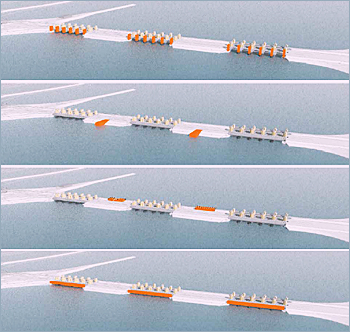 The master plan reveals no construction details of the pumping station. Four options are given to incorporate the pumps in the existing sluice complex.

Additional pump capacity
The Afsluitdijk fulfils a key role in the water level management of the IJssel Lake. Discharge sluices at both ends of the dam allow to drain water during low tide at the Wadden Sea.

Due to the expected sea level rise, the discharge capacity of these sluices will decrease. Therefore a additional pumping station will be built.

The new pumping station will have an initial capacity of 400 m3/s. This allows enough discharge capacity during high tide on the Wadden Sea, till 2050.

The new pumping station will be the biggest in Europe. Its capacity will surpass the current record-holder at Katwijk, also in the Netherlands. The biggest pumping in the world is located in New Orleans with a capacity of 567 m3/s. 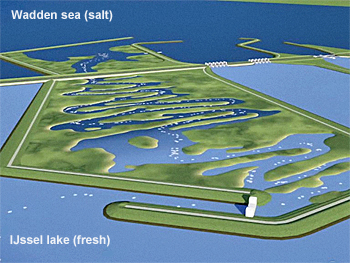 Fish migration river
A real novelty for the new Afsluitdijk will be a 5 km long artificial fish passage. This passage will provide a connection so that migrating fish can swim freely between the Wadden Sea and the IJssel Lake.

The artificial river ensures a gradual transition from sea water to fresh water.

Millions of fish are now waiting in the Wadden Sea in front of the discharge sluices. They can sense the fresh water and want to get inside. But the current is usually too strong for these migratory fish to swim against.

A permanent opening via the Fish Migration River should make it possible again for these migratory fish to swim freely from salt to fresh water.

Tourist attraction
On the occasion of the presentation of the master plan, Dutch minister Schultz van Haegen emphasised that the closure dam is to become a national tourist attraction. "In addition to strengthening the dam, we seize the opportunity to make it more attractive to tourists. The dam already attracts tourists from all over the world. But they stay only for a short period".

Schultz: "By adding new attractions and include designs that enhance the experience of the unique landscape, we hope to be able to extend the duration of their visits".

Artist and innovator Daan Roosegaarde has been asked to create a design that shows the value of the dam as an international icon for Dutch hydraulic engineering, innovation and design.

This video shows how the artificial fish migration river works.