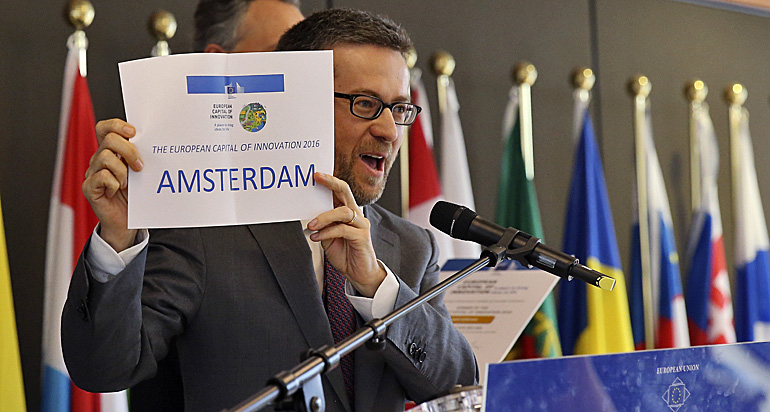 The European Commission has awarded Amsterdam the European capital of innovation - iCapital - award 2016.

This year's winner was announced during an award ceremony in the office of the European Committee of the Regions on 8 April in Brussels, Belgium.

The Dutch capital was chosen for its holistic vision of innovation related to four areas of urban life: governance, economics, social inclusion, and quality of life.

Tomorrow, on 14 April, Amsterdam will show its new reputation as Europe's centre of innovation when it hosts the Innovation Expo.

This year the Innovation Expo is an official event of the Dutch EU Presidency.

This year's Innovation Expo takes place in Amsterdam tomorrow as an official event of the Dutch EU presidency.

Innovation expo
The expo will show 200 technical and social innovations relating to a green, creative megalopolis.

Transport minister Melanie Schultz van Haegen and environment minister Sharon Dijksma will visit the expo, together with approximately 50 ministers from all over the EU and members of the European Commission.

Shining examples of innovative cities
On the occasion of the iCapital award ceremony in Brussels, European commissioner for research, science and innovation, Carlos Moedas (on top photo), said: "The competition was very tough and the outstanding achievements of the all nine shortlisted cities are an inspiration to others. They are shining examples of how cities can put innovation to work to improve the way people live and businesses work."

Markku Markkula, President of the European Committee of the Regions, said: "This award is all about speeding up change: we must encourage cities and regions to tackle burning societal challenges by jumping on the innovation train and spreading bottom-up experiences."

According to Markkula the EU needs pioneering cities and regions like the winner, Amsterdam, to lead the way.

Expanding on innovation
Amsterdam was chosen by a panel of independent experts in a close competition with eight more finalists, including Torino (second place) and Paris (third place). Amsterdam's 950 000 euro first prize will be used to scale up and expand the city's efforts on innovation. 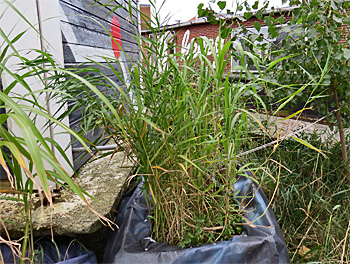 Boats acting as offices on a former ship yard, De Ceuvel, in Amsterdam that is fully self sufficient in its water supply by harvesting rain water.

Contaminated old ship yard
The city of Amsterdam has lent a former ship yard for ten years to a group of initiators that created a community-driven working environment for creative and social enterprises.

Two years ago some 16 old houseboats were put ashore on this former industrial plot. The former boats were retrofitted as offices with a dry toilet and a rainwater catchment system for the water supply.

Around the offices a winding wooden walkway was constructed in a landscape of soil-cleaning plants. The soil remediation is monitored and the site is expected to be much cleaner in ten years' time when the lending agreement stops.

De Ceuvel is also a site for benchmarking existing technologies and researching new ones, such as the recovery of struvite from urine. An extensive network of sensors will gather data on energy, water and material flows, user behavior and technological performance.

The project is led by Metabolic, a consultancy on clean tech development. 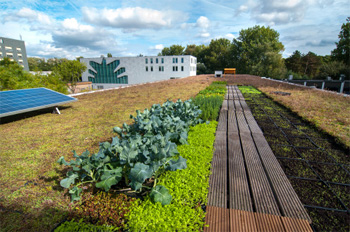 Green roofs in Amsterdam to delay the rain water run off in the storm water sewer system.

Amsterdam rain proof
Another innovative project is Amsterdam Rainproof, a movement that encourages citizens to renovate or alter their roofs, gardens, roads and parks in a rain-proof way.

The reason to buffer the rain water is not so much because of scarcity, but more of flood prevention. In case of extreme rainfall the green roofs and buffers will delay the run off.

This will prevent roads and streets from flooding.

The district of Buiksloterham has been appointed as a living lab for the circular city, a place for experiments with better waste sorting and recycling, as well as local water treatment, circular construction and local and collective energy production.

Video entry by Amsterdam for the iCapital challenge 2016.