The Chinese National Energy Administration has commissioned an economic assessment into the viability of building a Dynamic Tidal Power (DTP) facility off the east coast of China.

This announcement brings the initiative by the Dutch DTP-consortium to build a long dam-like structure of the Chinese coast for large scale generation of tidal power, one step closer. 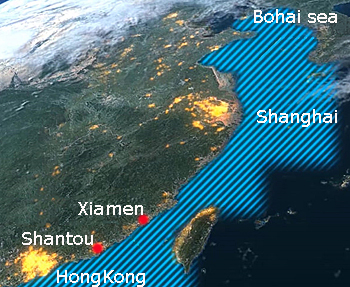 Potential area for tidal energy along the Chinese coast (blue shaded). The assessment will concentrate on the coastal areas between Xiamen-Shantou (below) and the Bohai Sea (top).

Equivalent of six coal power stations
The potential facility would involve the construction of a dam stretching 60-100 km perpendicular to the Chinese coast between Xiamen and Shantou, and in the entrance to the Bohai Sea.

The dam would capture power from the tide through a network of 4,000 turbines that would generate up to 15 gigawatts of energy.

This is the equivalent of six large coal or gas power stations and would provide energy for more than ten million homes.

Proof of principle
A consortium of eight Dutch companies, including ARCADIS, is leading the development of this new, patented technology with the Chinese Government, known as the Power programme.

Following a series of feasibility projects over the past three years which have demonstrated the proof of the principle and assessed potential locations, the current economic assessment will look at the design and construction costs which are estimated to be in the region of 40 billion USD. 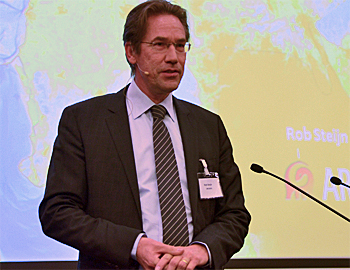 Good tidal conditions
Rob Steijn (photo left), one of the inventors of the technology and Director of the River, Coast and Sea Department at Arcadis said: "We are thrilled about the fruitful co-operation with our Chinese partners. Of course it helps a lot that many tidal conditions along the Chinese coastline are very good for the concept of dynamic tidal power."

In addition to China, a number of other coastal locations around the world have been identified as having potential for dynamic tidal power. These include the Korean Peninsula and in the North Sea off the coast of the UK and Northern Europe.

The Chinese economic assessment is expected to be completed by the end of 2014. If successful, the next stage is the testing and final design with the project potentially being completed by 2020.

About Dynamic Tidal Power
Dynamic Tidal Power is a potential new method of tidal power generation. It involves creating a large dam-like structure extending from the coast straight into the ocean, with a possible perpendicular barrier at the far end, forming a large 'T' shape.

This dam would harness the tidal waves running along the coasts of continental shelves which contain powerful hydraulic energy.