Construction of the existing bridge began back in 2011, but the bridge was never commissioned due to technical errors.

The Chilean Ministry for Public Works consequently went out to tender, with the aim of resolving the bridge's problems once and for all with a new party. 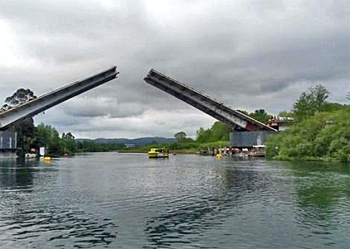 Construction of the bascule bridge over the Cau-Cau river was finished in January 2014 but it has never been commissioned.

Misaligned
The bridge was intended as Chile’s first movable bridge, but there were technical errors in its design and construction. In 2013 it became apparent that the two bridge elements did not align properly and in 2015, during testing, one of the cylinders failed.

At the end of 2016 the client, La Dirección de Vialidad del Ministerio de Obras Públicas, went out to tender with several local engineering consultancies, on the condition that they must bid in association with a specialist foreign engineering firm.

The contract involves setting up a consortium with the Chilean engineering firm LEN & Asociados.

LEN is one of Chile’s top engineering firms, with more than 40 years of experience in consultancy and engineering services in the field of infrastructure.

Tendering and construction will also be supervised by the consortium. The work will take at least three years to complete.

Of the three bidding parties, the AG-LEN bridgXperts consortium submitted the best financial bid. The final contract will be awarded shortly.

This news item was originally published on the website of Antea Group.