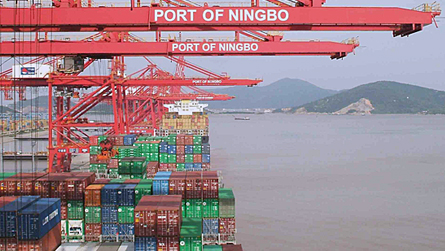 The Hague, Netherlands - Leaders from the Ningbo Port Group and APM Terminals were on hand in Copenhagen to sign a major agreement that creates a new level of cooperation in the fastest growing, deepwater, container port in the world.

The new agreement reflects a 75%/25% (Ningbo Port Group/APM Terminals) share to jointly invest and operate berths 3, 4, 5, comprising a one kilometer quay in Ningbo’s Meishan Container Terminal. Once constructed, the new facility will become operational by December 31, 2014.

Extra port capacity
"This agreement creates important, new port capacity needed for our customers in one of the fastest growing container markets in the world. We look forward to working closely with our partners in the Ningbo Port Group", stated Henrik Lundgaard Pedersen, CEO of APM Terminals Asia-Pacific region, based in Shanghai, China.

Sixth largest container port in the world
Ningbo is a major gateway port in Eastern China and the Zhejiang Province. It is the 6th largest container port in the world with strong growth. Container throughput in Ningbo grew 17% annually from 2006 to 2010 and reached 14.5 million TEU in 2011. At the current growth rate, Ningbo capacity utilization will exceed 80% by the end of 2012, and the Meishan project for berths 3-5 represents the future source of capacity.

Meishan Container Terminal is the newest container terminal in Ningbo. It has five deep water container berths with designed capacity of 3 million TEU situated in the Meishan Bonded Port Zone.

Ideal market access
Zhejiang is located in the southern part of the Yangtze River Delta on the southeast coast of China. It faces the East China Sea on the east and neighbors Fujian on the south. Ningbo derives 95% of its growth from Zhejiang province which is the 4th largest economy and 5th largest export/import hinterland in China, serving a population of 55 million.

Concentration of vibrant manufacturing business
Zhejiang province boasts the most vibrant private manufacturing businesses in China, which export a wide range of products ranging from auto parts to cigarette lighters. Exports from the province have gained significant competitive advantage due to the efficiency of private ownership and scale of economy from industry clustering.

As a result, Ningbo Port is the fastest growing container gateway in China.

This press release was originally published on the website of APM Terminals.