APM Terminals: Ports must prepare for new era in shipping 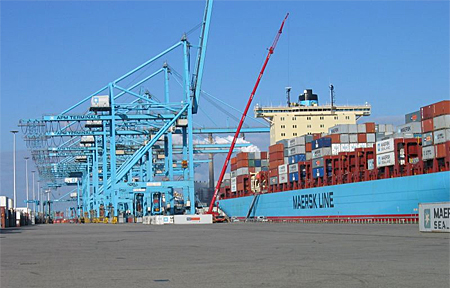 Port and terminal operations face major challenges in both capacity and productivity during the next decade, APM Terminals vice president and chief financial officer Christian Moller Laursen has warned.

With the prospect of global port container throughput doubling from its current 600 million container units (TEU),  in 15 years, and aggressive investment in vessels of over 10,000 container (TEU) capacity, port and terminal operations face looming challenges in both capacity and productivity,

Laursen said the industry was entering a “new era in ports” as he addressed Port Finance International Conference in London on 17 November.

Cargoes msut be moved quickly
“Container yards processing significantly larger container volumes from individual vessels as well as general global volume growth will have to be able to have cargoes moved in time for the next scheduled vessel call, when the process will begin all over again, often in a matter of just a few days, or as just seen, in some cases on a daily basis,” he said in his conference key note.

Rotterdam and Moin: good examples
According to Laurens the new APM Terminals at the Port of Rotterdam Maasvlakte II site, scheduled to open in 2014, are a good example of port planning in the 'new era'.

Already Europe's busiest container port, the Port of Rotterdam's Maasvlakte II, a direct extension of the existing Maasvlakte, is being constructed entirely on land reclaimed from the North Sea, and will have both direct rail access and cranes capable of servicing the global container fleet’s newest and largest vessels.

The new 1 billion USD terminal planned for Costa Rica's port of Moin, is another 'new era' project by APM Terminals.  The port has an eye firmly set on the growing importance of Latin America to new Asian, European and African trading partners and the arrival of 'post-Panamax' vessels to the Atlantic via the widened Panama Canal locks in 2014.

Ports cannot wait but must anticipate
“The port industry does not have the luxury of being able to react to changes in the market environment. We must be able to anticipate and be able to deliver the terminal capacity and productivity that our customers will require,” said Laursen.

With more than 60 ports and 132 inland facilities in 63 countries, APM Terminals’ aim is to take a leading role in addressing the critical issues facing the transportation industry.

This news items is based on the APM Terminal press release (pdf, download):
New era in ports