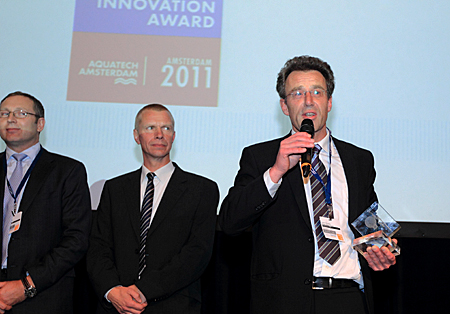 The Fish-friendly pump of Pentair Nijhuis is the overall winner of the Aquatech Innovation Award 2011. This was announced durung the official opening ceremony of the watertechnology trade fair Aquatech and the International Water Week in Amsterdam. In the presence of Dutch state secretary Joop Atsma and 40 national delegations, the chairman of the jury Cees Buisman handed out the ward for the most innovative product at the trade fair.

Innoviation very much alive
"It is quite remarkable to see the extent to which the water sector continues to improve on a broad range of technologies,", said Buisman. "Follow-up innovation is still very much alive in the water industry worldwide, despite the economic situation".

Combination of fish-friendly and high efficiency
The jury was unanimous about the fish-friendly pump from Pentair Nijhuis. According to Buisman the new pump represents a major breakthrough for the long term problem of the killing of fish, which had remained unresolved despite the enormous efforts of science and industry. Older generation fish-friendly pumps lacked efficiency. The new PF-pump of Pentair-Nijhuis has an efficiency of 80%.

Winners in the various subcategories were:

Proud development team
Pentair is very pleased with their Award. “We are happy and proud to have won, the technology is proven and is really working”, says Juergen von Hollen, Vice-President CPT Water of Pentair. He adds: “The product has been in development for two years, and we have been able to test it fully the last year. A lot of time and energy has been invested in it by the Pentair Nijhuis team.” Von Hollen explains that the Fish-friendly pump is on display at the stand and that the actual impeller can be seen there, so that visitors can understand how it works.

Aquatech Amsterdam is part of the International Water Week, which will be held for the first time in 2011. The event brings together the worlds of water technology and water management. The IWW Conference will also be held during this week, from November 1 – 3, 2011.

This news item was originally published on the website of Aquatech Amsterdam 2011.