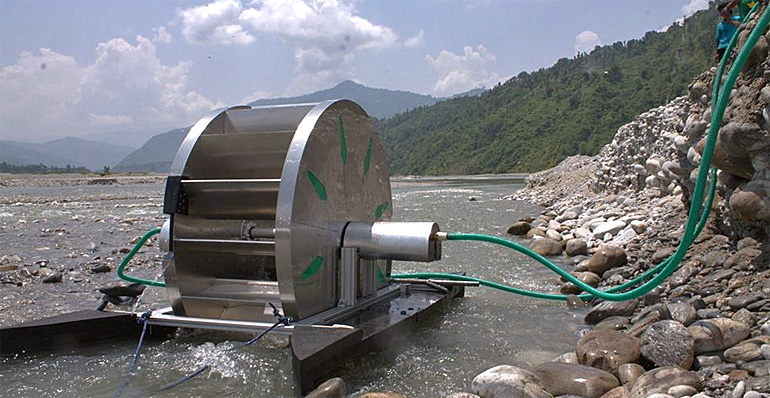 Dutch start-up company aQysta is building and testing six new river-powered Barsha pumps in Nepal. These Barsha pumps derive their energy from the river flow and scoop up the river water, pumping it to farm fields up to 3 km inland.

In June the company demonstrated its new brainchild for the first time in a river in Nepal, pumping water from the river bed to the elevated farm fields. With support from the US-Swedish-Dutch programme Securing Water for Food (SWFF), aQysta is now rolling out the concept to other parts of Nepal.

Eventually, the company hopes to scale up to mass production and offer the technology to small-to-mid-size farmers in four countries: Nepal, Ecuador, Indonesia, and Spain. 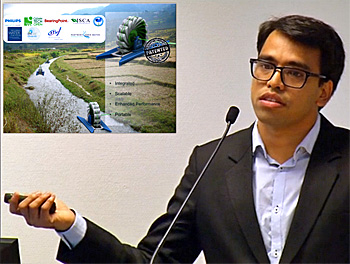 Co-founder of aQysta, Pratap Thapa, pitched the roll out of the Barsha pumps for the SWFF-challenge at the Stockholm Water Week 2014.

Polluting diesel pumps
The Barsha pump is an ideal solution for farmers situated near rivers and canals that require continuous access to water for irrigation. Co-founder of aQysta, Pratap Thapa, got his idea growing up in Nepal where his family owned a farm on the slopes adjacent to the Lele River.

Despite their proximity to the riverbed, they had difficulty providing water to nourish their rice, wheat, and potato crops. To move water from the river to their elevated field required expensive, polluting gasoline or diesel pumps.

"Nepal is a country of 6,000 rivers, but people have to struggle because of geography," Mr. Thapa said. "There are many places where rivers are flowing but people can’t get water to their fields."

Start-up company
Thapa left home to pursue a master’s degree at Delft University of Technology in the Netherlands, where he founded the start-up company aQysta and brought together a team to research solutions to this problem.

Their brainchild – a river-powered pump that channels the river’s energy to lift water to agricultural fields - has no operating costs, requires little maintenance and is emission-free.

Farmers who participated in early tests were enthusiastic. "When people first saw the pump, a lot of them were asking in disbelief, ‘Does it work?", said Mr. Thapa. "But once it was working, without fuel electricity, they were really excited."

Scaling up
In September aQysta was one of the companies that won a grant from the Securing Water For Food (SWFF) programme. This programme is supported by the U.S. Agency for International Development (USAID), Sweden’s development agency (Sida), and the Ministry of Foreign Affairs of the Kingdom of The Netherlands (MFA-NL).

The SWFF programme organised a challenge for exceptional concepts to produce more food with less water. aQysta was selected as one of the 17 awardees from 520 applications from over 90 countries.

This news item was originally published on the website of SWFF/USaid.