The new company will roll-out a monitoring system that is based on innovative technologies that have been developed in the Netherlands to detect deformation and internal erosion.at an early stage.

The agreement was recently signed and was announced by Arcadis and InTech on 5 November at the Amsterdam International Water Week. 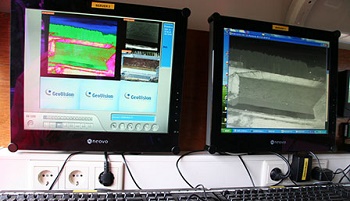 Many different technologies
The new company Dike Monitoring Netherlands will support and advise levee and dam owners on the behavior of their flood defences under different circumstances.

Early detection of small deformations, seepage or piping of levees and dams , enables the owners to take action and prevent a possible breach.

Combining all data
The data that is generate by these new monitoring techniques is combined with data provided by existing techniques and transformed to useful information .

This way Dike Monitoring Netherlands enables levee and dam owners to address possible problems in an very early stage, such as earlier detected seepage situations that may lead to piping.

This news item was originally published on the website of Arcadis (in Dutch only).

Intech installed its 3D laser scan technology to monitor a  real-time stress test of a Dutch levee. The levee was intentionally destabilized and collapsed in the very early morning of 14 October 2015 when it was still dark. The orange colouring of the levee shows the first serious deformation.