For the second time design and consultancy firm Arcadis helps with the realization of a tunnel under the Suez Canal in Egypt. After the Ismailia Road Tunnel, Arcadis is now working on the three kilometer long tunnel under the canal at Suez.

Client of Arcadis is a joint venture between Egypt based companies Petrojet and Concord for Engineering and Contracting. The end client is the Ministry of Defense represented by the Engineering Authority of the Armed Forces (EAAF).

Acradis announced the project on 21 May. 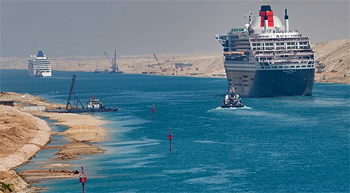 As part of the Suez Canal Corridor Development Project three new tunnels will be constructed underneath the recently widened and deepened canal.

The tunnel consists of a tunnel tube with a diameter of 13 meters at a maximum depth of 40 meters below ground level.

Arcadis is to deliver the complete design from concept to detailed design for the tunnel construction including the alignment, launch and receiving shaft, intermediate inspection and ventilation shafts, cross passages and highway design.

The design project also includes all MEP systems, such as ventilation, light, communication, pump systems and a fixed firefighting system.

The tunnel, with two parallel tunnel tubes will be constructed as a TBM drive with two tunnel boring machines with a 13.0 meters diameter.

The total TBM length will be about 4.7 kilometers, excluding the connecting ramp structures. 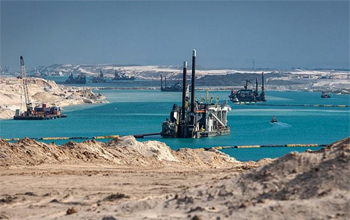 The widening and deepening of the Suez canal was completed in Augustus 2015 and involved Dutch dredging companies Van Oord and Boskalis.

‘It is an honour to be able to continue working on such a project under the Suez Canal for the second time,’ says General Manager Gert Kroon of Arcadis in the Netherlands.

According to Kroon his firm was called in again as its technical tunnel expertise proved of great value at the Ismailia Road Tunnel. ‘We've shown that all our different business units work well together. There was enormous time pressure on the construction of the first tunnel and we quickly delivered a robust design’, Kroon adds.

‘Colleagues from different European countries are involved and we are ready for this second tunnel.’

The Ismaïlia Road Tunnel project is part of the investments made in the context of the Suez Canal Corridor Development Project.

In addition to the construction of the new Suez Canal a rail and road tunnel will be constructed at three locations (Port Said, Ismailia and Suez).

The Ismailia Road Tunnel is located in the vicinity of the town of Ismaïlia, halfway between Port Said and Suez alongside the Suez Canal.

This news is based on the original project presentation on the website of Arcadis.